After protests, Iran's Khamenei demands punishment for those who harm economy

After protests, Iran's Khamenei demands punishment for those who harm economy 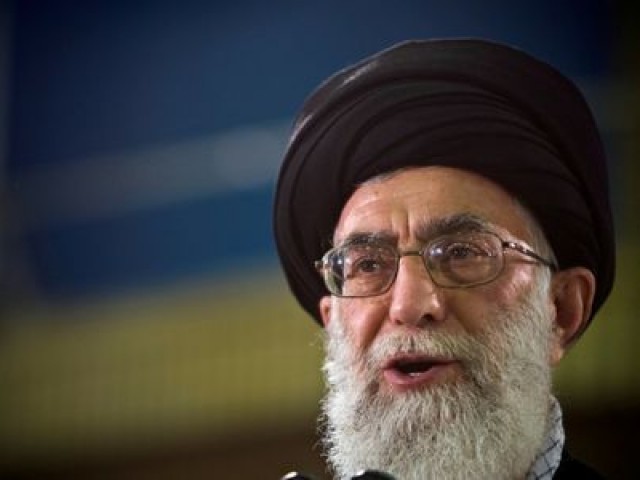 BEIRUT: Iran’s supreme leader demanded punishment for those who disrupt business, signalling a tougher line after two days of strikes by market traders, the biggest unrest since the start of the year.

With the economy facing the prospect of new US sanctions, the country’s leadership signalled it was taking a united front toward the unrest. In a speech, President Hassan Rouhani, a pragmatist who has long sought more open economic relations with the outside world, blamed Washington for Iran’s hardship, calling on Iranians to “bring America to its knees”.

At Tehran’s Grand Bazaar on Wednesday, business was back to normal after the two-day strike had closed most shops.

On Monday traders had massed outside parliament to complain about the plunge to record lows of Iran’s currency. Reuters was unable to verify footage that showed police clashing with protesters. Public demonstrations are rare in Iran but in recent months there have been several over the state of the economy.

It is impossible to remove oil from market by November, says Iran

Supreme Leader Ayatollah Ali Khamenei, the hardline cleric in power since 1989, demanded the judiciary punish those “who disrupt economic security”, in remarks clearly intended to send a message to Iranians who may plan more demonstrations.

“The atmosphere for the work, life and livelihood of the people must be secure,” he said in a meeting with judiciary officials, according to his official website. “And the judiciary must confront those who disrupt economic security.”

The bazaar strike is the biggest sign of domestic disquiet in Iran since the United States abandoned a deal to lift economic sanctions in return for curbs to Tehran’s nuclear program. The deal was the centrepiece of Rouhani’s plans to open Iran’s economy, which won him two landslide elections but has yet to bring widespread economic benefits for many Iranians.

Washington has pledged even tighter sanctions than before, although its European allies and other world powers say they still support the nuclear deal.

“We will take problems. We will take pressure. But we will not sacrifice our independence,” said Rouhani in an address broadcast on state television.

In the latest US push against Tehran, a senior US official said on Tuesday that countries buying oil from Iran should prepare to halt all imports of it starting in November or face punishment.

The threat of restored US sanctions has caused the rial to collapse, hurting business by driving up the cost of imports. The rial traded at 78,500 against the dollar in the unofficial market on Wednesday, according to foreign exchange website Bonbast.com. This compares to around 43,000 at the end of last year.

“It should surprise no one #IranProtests continue. People are tired of the corruption, injustice & incompetence of their leaders. The world hears their voice,” tweeted US Secretary of State Mike Pompeo.

“Iran exports a total amount of 2.5 million barrels per day of crude and condensate, and eliminating it easily and in a period of a few months is impossible,” the official told the semi-official Tasnim news agency.

Trump’s determination to deprive Iran of funding raises the stakes for Rouhani, who has attempted to appease anger over his government’s handling of the economy.

The Iranian parliament showed the level of discontent over Rouhani’s performance, issuing a letter, signed by 187 representatives — more than half of the total — asking that the president change his administration’s economic team.

Mehrdad Emadi, an Iranian economist who heads energy risk analysis at London’s Betamatrix consultancy, estimated US sanctions could cause Iran’s crude oil exports to drop by between 500,000 and 800,000 bpd in coming months.

Rouhani says Iran will not give in to pressure from Trump

He said a fall below 1.4 million bpd — the level two years ago, before the nuclear deal — was unlikely as Iran would remain able to sell some oil abroad through barter deals. Turkey said on Wednesday it did not consider itself bound by the US effort to stop Iran exporting oil.

But the sanctions may stifle Iran’s long-term plans to expand its oil industry. After a deal reached this month among global oil producers to raise output, Saudi Arabia and Russia look set to take market share from Iran.

“Iran is in a weaker position to cope with these sanctions than it was during the last sanctions period two years ago,” Emadi said.

Then, Iran had some $150 billion of currency stored abroad in countries such as China and Turkey as well as European banks. Detailed figures for foreign exchange reserves are secret, but Tehran has now drawn down much of that buffer to handle expenses such as capital flight and foreign intervention, Emadi said.

He predicted Iran might ultimately enter a fresh recession as lower oil revenues prompted the government to put public sector projects on hold and as the economy became more militarized in response to US pressure.

A downturn in growth could worsen bad debt problems in the banking sector, which the International Monetary Fund has warned could destabilize the economy.