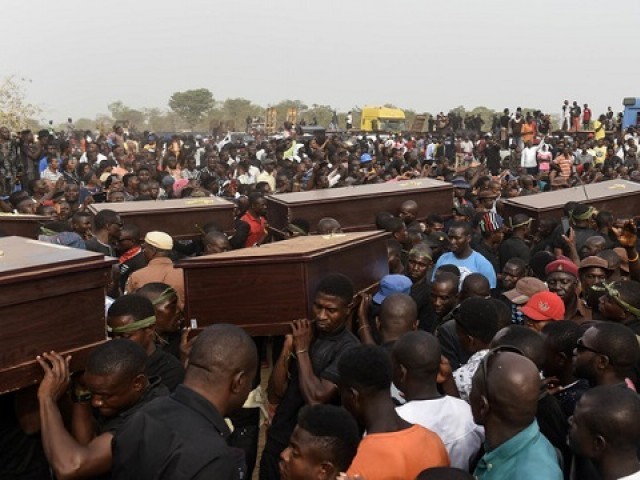 Over 200 killed in Nigeria in weekend violence. PHOTO: AFP

JOS, NIGERIA: More than 200 people were killed in violence against farming communities last weekend in Plateau state, central Nigeria, according to a speech by the governor published on Wednesday.

Simon Lalong said after a closed-door meeting with President Muhammadu Buhari in the state capital Jos on Tuesday night that the clashes had left “the painful loss of over 200 people”.

The police, who blame suspected cattle herders, have said 86 people were killed. However, multiple local sources from the communities affected maintained more than 100 people died.

The main association representing the largely nomadic herders has denied its community had any involvement in the killings.

The violence is the latest bout in months of bloodletting in Nigeria’s so-called “Middle Belt”.

The clashes are rooted in tensions over access to land between pastoral herders and sedentary farmers, but have generated sectarian friction between Muslims and Christians.

Buhari came to power in 2015 on a promise to curb insecurity across the country, in particular Boko Haram, whose Islamist insurgency has killed at least 20,000 since 2009.

20 killed in Boko Haram attack on Nigerian army base, villages

But a resurgence of violence in the long-running conflict between herders and farmers has put that under scrutiny as elections approach in February next year.

Analysts predict the extent of the unrest could eclipse that of the militants in the northeast.

Lalong said the latest attacks in Plateau were carried out with “sophisticated weapons” that were “reflective of a terrorist invasion”.

“It (the bloodshed) therefore demands a justified response like that which was undertaken to address the Boko Haram insurgency,” he added.

Lawmakers earlier this month threatened Buhari with impeachment because his security chiefs had repeatedly failed to protect lives and property.

The 75-year-old leader on Tuesday said he would “continue to pressurise members of the law enforcement agencies directly under me by the constitution as the commander-in-chief”.

He also said it was an “injustice” to imply he was doing nothing because he was from the same ethnic Fulani group as the herders and Muslim.