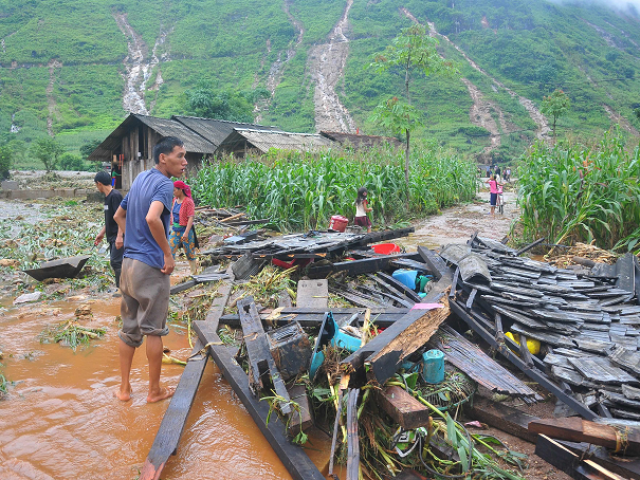 A Vietnamese man looking at the debris of his house destroyed by flash floods in northern Ha Giang province. PHOTO: AFP

At least 12 people are still missing after the weekend floods, and hundreds of police and soldiers have been deployed to help clean-up efforts.

Mock trophies selling fast in Vietnam ahead of World Cup

Vietnam is frequently lashed by harsh weather in the rainy season between June and November.

The latest storm hit several northern provinces, littering the area with piles of rubble and trees as residents scrambled to clean up their destroyed homes.

“Three died when their houses collapsed in Ha Giang province, while 12 others were swept away by flash floods, landslides and collapsed houses in Lai Chau province,” the national committee on disaster control said on Tuesday.

It said the storm caused $6.1 million in damage in the region.

One fish farmer said she lost everything when floods swept through her property and destroyed her pond worth $300,000.

“We are now deep in debt. All our fish were lost in the flash floods. We don’t know what to do now,” Do Thi Huong told AFP from Lai Chau province.

Several remote communities were still cut off on Tuesday after rocks and mud blocked roads in the area.

This is the first major weather incident of the year for Vietnam, which is still reeling after a deadly series of disasters last year.

Natural disasters killed 389 people and caused $2.6 billion in damage in 2017, according to official statistics.