The discus­sions took place in the truce villag­e of Panmun­jom in the Demili­tarize­d Zone
By AFP
Published: June 26, 2018
Tweet Email 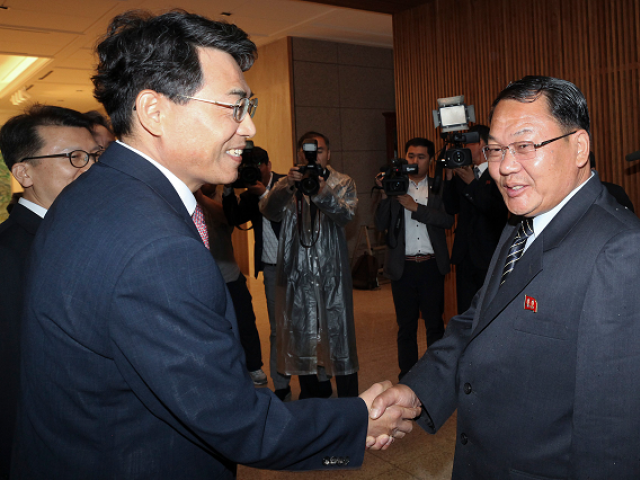 SEOUL: North and South Korea held talks Tuesday on connecting the railways that run across their border, a physical link that would transform the relationship between the two sides of the divided peninsula.

The discussions, the first on the issue for 10 years, took place in the truce village of Panmunjom in the Demilitarized Zone.

A rail line already exists from Seoul to Pyongyang and on to Sinuiju on the Chinese border, originally built by Japan in the early 20th century, long before the Korean War and decades of division.

Linking up the two systems — and modernising the North’s ageing rail infrastructure — would give trade-dependent South Korea a land route to the markets of China, Russia and on to Europe.

But doing so would represent a fundamental change on the peninsula: there has been no direct civilian communication between the two Koreas since their division was sealed by the 1953 armistice that ended the Korean War — not even post.

Despite the diplomatic warming on the peninsula, with summits between the North’s leader Kim Jong Un and both the South’s President Moon Jae-in and Donald Trump of the US, Pyongyang remains under heavy sanctions over its nuclear and missile programmes.

Any practical steps would only become possible after such measures are eased, South Korea’s chief delegate Kim Jeong-ryeol acknowledged as he set off for the meeting.

“But we can thoroughly research and study various projects we can pursue after the sanctions are lifted,” he added.

During an earlier period of rapprochement the South built a gleaming station at Dorasan, just south of the Demilitarized Zone, with platforms marked for non-existent services to the North’s capital.

On the eastern side of the peninsula, railways could connect South Korea’s port city of Busan to Europe via the North and Russia.
Kim and Moon agreed to “adopt practical steps towards the connection” of the railways at their first summit in April.

Moon has also shared his vision of linking the inter-Korean lines to trans-Siberian railways offering a route to Europe, saying it would bring “huge economic benefits” to Seoul and Pyongyang as well as Russia.

But freedom of movement for North Korean civilians could threaten the grip on power of the ruling Workers’ Party, which imposes tight controls on the population.

The rapprochement on the Korean peninsula was triggered earlier this year when Kim decided to send athletes, cheerleaders and his sister as an envoy to the Winter Olympics in the South.