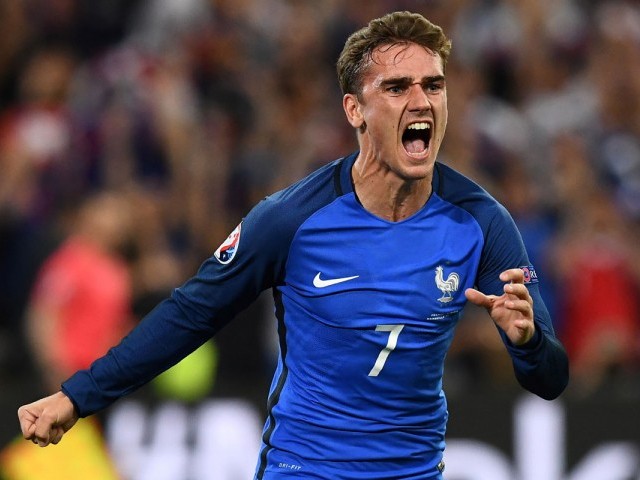 On the spot: Griezmann scored France’s opener from the spot but wasn’t at his usual best for the rest of the game. PHOTO: AFP

MOSCOW: World Cup contenders France are waiting for star striker Antoine Griezmann to hit his stride as they aim to secure top spot in Group C against Denmark on Tuesday.

Griezmann signed an extension with Atletico Madrid through to 2023 last week despite strong interest from Barcelona, but the 27-year-old has yet to find his best form in Russia.

While he scored from the penalty spot in an opening 2-1 win over Australia, his sluggish start to the tournament mirrors his early travails at Euro 2016 where Griezmann finished as top scorer.

“I think he will get stronger, I hope he does. That was the case at the Euros, he started slowly and finished very strong. I’m not worried about him,” said Chelsea forward Olivier Giroud.

Griezmann scored six goals as France finished runners-up to Portugal at the European Championship, clicking into gear as the competition progressed and netting five times in the knockout stages.

“He has had a long, gruelling season. He’s played a huge number of matches,” added Giroud, with Griezmann helping Atletico claim a third Europa League title. “When you have a bit less in your legs, it’s harder to be at ease on the pitch, but he’s still very important for us.”

Griezmann himself admitted there is room for improvement as France target a deep run at the World Cup.

“I’m going to get better and I’m sure the level everyone expects, including myself, is going to come quickly,” he told French TV channel TF1.

Didier Deschamps’ side are already qualified and would clinch first place with a draw in Moscow, a result that would also send Denmark through as runners-up irrespective of Australia’s result against Peru.

Bayern Munich midfielder Corentin Tolisso is keen to avoid Croatia in the last 16, even if finishing top could mean a blockbuster clash with Lionel Messi’s Argentina.

“Croatia will come out of Group D, so above all we have to avoid finishing second to avoid meeting them,” said Tolisso, who started the first game against Australia. “Between Nigeria, Iceland and Argentina, they are all good teams. We know the Argentines have very strong individuals, notably Lionel Messi. You never know what’s going to happen in a match. But we know the last 16 will be difficult, regardless of the opponent.”

Second-placed Denmark beat Peru 1-0 in their first game before a 1-1 draw with Australia to extend their unbeaten run to 17 matches.

Age Hareide’s side are looking to reach the latter stages at a World Cup for the first time since 2002.

“France may be considered among the favourites and have six points but they have not been finishing off opponents,” Hareide told Danish newspaper bold.dk. “They have been pushed to the wire to get the points. They played well in the friendlies, but have not played well so far in the World Cup,” he added.

Yussuf Poulsen is suspended after he collected a second booking in as many outings against Australia, the forward picking up a harsh yellow card following a VAR-awarded penalty.

Denmark are hopeful midfielder William Kvist will return at some stage after breaking two ribs and suffering a punctured lung against Peru, although it won’t be in time to face France.