Over 10,000 candidates to be given security for elections: sources

Over 10,000 candidates to be given security for elections: sources

Securi­ty will also be provid­ed to all ROs
By News Desk
Published: June 23, 2018
Tweet Email 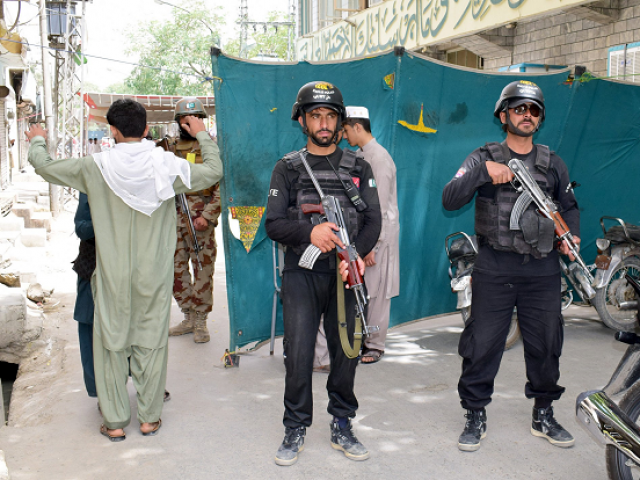 Over 10,000 candidates from across the political landscape of Pakistan will be provided security for the upcoming general elections,  sources confirmed to Express News.

The Election Commission of Pakistan (ECP) issued letters to all provincial chief secretaries and instructed them to ensure security for the conduct of free and fair elections. The letter also instructed instalment of CCTV cameras at all sensitive polling stations, sources confirmed.

Security of over 2,000 ‘influential individuals’ withdrawn on CJP directives in Punjab

The ECP also asked for security to be provided to all returning officers across the country. The letter prompted provision of security to all candidates and leaders of political parties.

In April, over 5,000 policemen were called back to barracks in Punjab two days after Chief Justice of Pakistan (CJP) Mian Saqib Nisar directed police chiefs of all provinces to withdraw security protocol provided to “influential individuals” not entitled to official security.

At least 2,000 people, including politicians, judges, lawyers and other government officials, were enjoying official security provided by the provincial government. Over 1,400 personnel deployed on the security of 313 politicians, 1,100 for 527 police officials, and 650 policemen on duty for protecting 480 officials of the subordinate judiciary were called back to barracks.

A report of Punjab government further revealed that 41 personnel for 39 lawyers, 300 for 275 religious leaders and 1,050 personnel in the name of a protocol of 250 ‘influential citizens’ were also called back by the authorities.