Black gold has so far been a safe bet but the party cannot go on foreve­r.
By Omair Lodhi
Published: May 23, 2011
Tweet Email 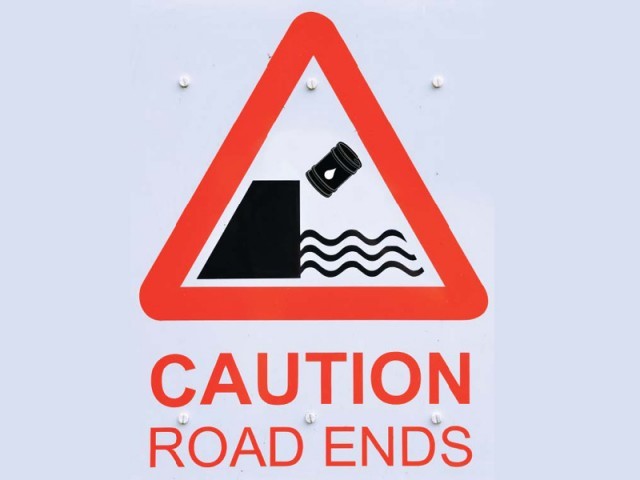 Black gold has so far been a safe bet but the party cannot go on forever. DESIGN: S.JAMAL

Oil prices have been fluctuating but have for the most part been on an upswing over the past few months. And with the recent surge in prices most hedge fund managers have heaved a sigh of relief. In last couple of weeks’ price action it seemed doom and gloom was set to hit all commodity markets around the world. Then news started spreading that George Soros has had enough of the commodity boom.

Not surprisingly, many senior traders preferred to keep their mouths shut even after weak data coming out of the economy in the United States; no one seems to be sure of their positions. The run up in commodities was primarily on the back of a weak dollar.

In what had been a simple bounce back of oil from the crash in commodity prices in the economic crash, not only oil but gold and silver started making new highs. The underlying weakness in the world’s largest economy made hedge funds pour money into commodity markets.

One after another, crisis after crisis in the Middle East pushed crude prices to higher levels and on breaching the psychological barrier of $100 most analysts went on their usual wild hunt preaching $150 and in rare instances as much as $250. The markets thrive on fear and greed, and it may be noticed that most analysts were employed by hedge funds or pure commodity players with exposures as deep as leverage would allow.

Whispers of shortages and depletion of reserves were cited as main reasons for the price and advocacy for acceptance of higher prices in trader circles. Most traders tend to forget that at the end of the day it is pure demand and supply which fuels price hikes. I had done a basic research to determine a few simple facts about oil production at major oil producing countries. The interruptions in the Middle East when eventual calm prevailed should have led to fear being driven out of the speculative markets. However, Libya erupted and a country which supplies just two per cent of world demand was the reason we were supposed to believe that the price is just right.

My basic research involved no high-end analysis, for those of us who like things simple. The really important question which comes to mind was the cost of production. If nowhere in the world is the cost of bringing black gold out of the ground rising, why on earth are all of us having to pay so much for the commodity?

In essence if supply shocks and transportation is disrupted that is one thing, in our case this has not been the case. The world has lived on $ 30 to $ 60 oil for the longest periods of time. The only factors which have changed have been the economy spending by OPEC nations. Their desire to build bigger buildings has created the need for money. Their budgets have been over-stretched spurring their urge for producing more. However with no increase in production and the world willing to pay higher prices they are happy to allow reserves to deplete at a slower rate.

Pushing oil prices downwards will eventually force producers with large spending economies to produce more, pressuring the cartel to crack. A spiral downward will eventually lead to hedge funds losing easy earned capital gains. This will lead them to book as much profit as they can. They are not the end users of the oil itself and have no loyalty to the commodity. As long as trading gains are there to be had, they will continue to pour public money into the markets. A slight hiccup and they all scramble towards better avenues. Eventually when speculators exit markets price panic is unprecedented.

As far as I am concerned, let the speculators run amok, sooner or later the oil producers will realise that higher oil prices is going to dent global growth. That is as good as shooting oneself in the foot, which already they have done to some extent.

Let the bloodbath begin, and I for one will be smiling all the way to the gas station when sanity prevails and regulators jump in to control losses of mega funds. The party cannot last forever, and the fat lady will finally sing.

The writer is a finance professional having worked in the banking and capital markets and is founder of Logical Fools a web blog for alternative news, views and reviews

World’s fastest growing market: Mobile banking could be the next big thing