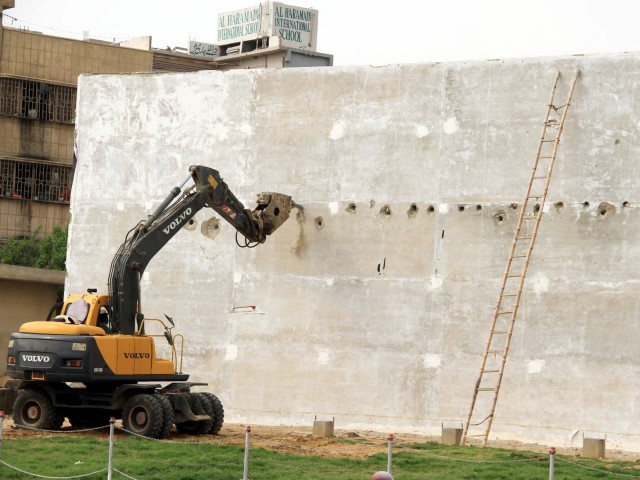 A wall built near FTC Building to show advertisements being demolished on the orders of the Supreme Court. PHOTO: PPI

KARACHI: The Supreme Court (SC) disposed of on Thursday all petitions calling for the removal of advertisement walls from the city.

A larger bench, headed by Chief Justice Mian Saqib Nisar, heard the matter at the Karachi Registry. Representatives of cantonment boards and the Outdoor Advertising Association attended the hearing.

Responding to a query, the cantonment boards’ officials said most of the advertisement walls, including those in the limits of the Faisal Cantonment Board, had been demolished.

The advertising association requested the apex court to devise some mechanism to allow the use of advertising walls as the advertisers had invested Rs15 billion to construct the walls. However, the bench dismissed the plea, stating that the advertisers were themselves responsible for their losses.

Do not want to run government from courts, says SC judge

The SC also directed to remove advertisements from walls constructed for security purposes.

The SC also clubbed all the petitions pertaining to the construction of illegal high-rise buildings in the metropolis.

The apex court summoned all the parties concerned and directed them to bring complete records.

A lawyer representing builders, however, contended that the constructions were legal and the builders had obtained all the necessary no-objection certificates and permits by the SBCA.

After listening to arguments from both sides, the court directed to club all the related petitions and told the parties concerned to bring all the records on the next hearing.