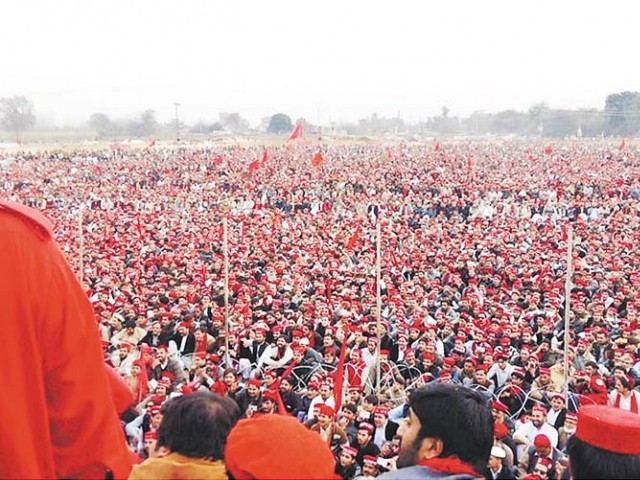 PESHAWAR: As it prepares to force its way back into power at the provincial stage, the Awami National Party (ANP) on Tuesday unveiled its manifesto for the upcoming general elections with a focus on improving the law and order situation in the province, besides pledging efforts for promoting education and healthcare.

The manifesto, which seems a little dated apart from somewhat following on from what the Pakistan Tehreek-e-Insaf (PTI) managed over the past five years in Khyber-Pakhtunkhwa (K-P), also promises efforts to steer the country from the current internal and external challenges and to make all state institutions exercise their constitutional powers.

The 27-page document, outlined by ANP’s Central General Secretary Mian Iftikhar Hussain at a news conference at the Bacha Khan Markaz on Tuesday, claimed that it provides their five-year plan.

The plan, he said, will be implementing the same way they did when they were in power between 2008 and 2013.

“Our first priority, like in the past, is to restore a durable peace [to the province],” claimed Hussain, elaborating, “We have to change this temporary peace into a permanent peace.”

The ANP stalwart and former provincial minister went on to say that their top priorities also include promotion of education, healthcare, and economic development.

But without restoring peace, no progress was possible in any sector, he contended.

Hussain, though, sought to make the difference between their manifesto and similar sounds from the PTI camp clear.

The ANP, he said, will not be presenting a roadmap to bring change within the first 100 days of its tenure. Rather, he said, their manifesto presents a comprehensive plan to steer the country out from the deep pit of problems at the external and internal level.

“ANP is giving a proper manifesto, not for 100 days but for the full five-years because we have a realistic approach to follow and implement instead of passing time in sit-ins,” Hussain stated while taking a veiled swipe at the PTI.

Moreover, he stated that the ANP will declare education as an emergency at the federal and the provincial levels and will increase allocation for education to six per cent of the gross domestic product (GDP) while a minimum of six per cent of the GDP allocation will also be allocated to the health sector. It also pledges to work for the protection of women, children, and human rights.

Talking about the system of accountability, a key component of PTI’s manifesto, the ANP general secretary said that they aim to make all state institutions accountable.

To do this, Hussain said, they will activate the existing system of parliamentary committees.

“It is very strange that we already have a system available but they had set up institution over institutions,” Hussain said in another veiled swipe against the PTI.

“Dual institutions are being made to protect themselves from other institutions,” the ANP leader explained.

He pointed out standing committees and other procedures exist to catch those who commit corruption and bring them to justice.

Moreover, he said that the apex anti-corruption watchdog, the National Accountability Bureau (NAB) was also available to prosecute corruption case. However, Hussain criticized that it was created after parliamentary committees were not stopped from performing their assigned tasks.

“Politicians are fully aware and will never allow parliamentary powers to be exercised by other institutions.”

Hussain further announced that the ANP will ensure that the judiciary performs as per its constitutional role.

As we have seen, the Supreme Court is engaged in parliamentary issues and spends a lot of its time on issues relating to parliament instead of solving the judiciary-related issues and ultimately the public suffers, he said.

“Millions of cases are pending before the courts; the Supreme Court should not be bogged down with taking up Constitutional cases. Instead, the ANP will work for setting up a separate Constitutional court.”

“The state is insecure due to the ways through which the external and internal policies are being crafted,” the ANP leader said.

“Currently, our relations with neighbouring countries are not good. The ANP will work for an independent foreign policy and special attention will be paid to relations with Afghanistan and establishment of good relations with India will be given high priority. ANP will strive for normalcy in the relations with the United States based on mutual interests and respect,” he outlined.

ANP pledged that it will continue to strive for effective implementation and parliamentary oversight of the National Action Plan (NAP) and will build the capacity of National Counter Terrorism Authority (NACTA).

A Martyrs Cell will be set up in the provinces which ensure the wellbeing of martyr’s families. The party pledged to evolve a standard policy for compensation, including a public insurance policy, for victims of sectarianism, terrorism, and violence.

The manifesto provides that they will accord special attention to the newly-merged districts of the Federally Administered Tribal Areas (Fata).

Alliance with other parties

“We have made our policy clear,” claimed Hussain, “Whoever comes into power, as a result of the upcoming general election, they must know that the ANP will join or support them only if they obey these guidelines.”

He added that everyone is aware of the strength of ANP and nothing will move forward until ANP is taken into confidence.