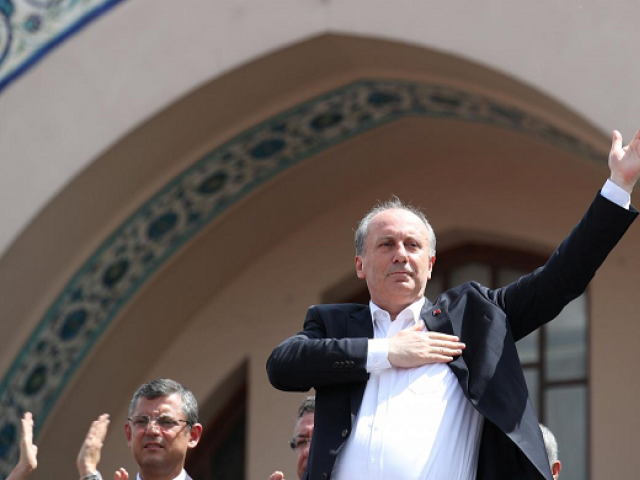 Ince does not mince his words in criticising what he says are the defects of Erdogan's 15 year rule, pointing to a lack of freedom of expression, weak judicial independence, high inflation and his policy on Syrian refugees. PHOTO: REUTERS

YALOVA: With a week to go to crucial Turkish elections, President Recep Tayyip Erdogan and his main rival Muharrem Ince are trading blows in an unexpectedly bruising fight to win control of the country.

Erdogan prides himself on his formidable campaigning skills but Ince, a fiery orator from the left of the secular Republican People’s Party (CHP), has shown he can match the president’s famed charisma and rhetoric.

As the clock ticks down to the June 24 polls, the pair are holding several rallies daily, often visiting the same key battleground town within days of each other in what now appears to be the biggest ballot box challenge of Erdogan’s career.

This week they held competing rallies on consecutive days in the town of Yalova on the Sea of Marmara south of Istanbul, the port where Ince was born and which he has represented as an MP in successive parliaments.

“Mr Muharrem is on his fourth parliamentary mandate as a deputy for Yalova. But what did he bring to this town?” barked Erdogan on Thursday, noting that his government had built a university in Yalova.
Holding a rally in the same spot a day later, Ince hit back: “Erdogan, you listen for two minutes! What did I bring to Yalova? A candidate for the presidential election, a candidate who is going to win!”
A former physics teacher, Ince is by no means a complete contrast to Erdogan.

Like the president, he comes from a relatively modest background and likes to present himself as the champion of people taking on the elite.
In the campaign, Ince surprised observers by being unafraid to take the battle direct to Erdogan, forcing the president onto the back foot to the delight of the CHP faithful which had grown used to successive electoral defeats.

While Erdogan is near certain to reap the most votes in the first round of polls, many analysts believe he will win less than 50 percent, forcing a run-off against Ince on July 8 where the opposition candidate may be a formidable rival.

Ece, a student who came with her friends to Ince’s Yalova meeting, said she was won over by him, pointing to his affable sense of humour. “He hits back and he is funny — we like him for that.”
“He is facing someone (Erdogan) who criticises his opponents with the toughest words,” said Kadir Yolcu, a worker aged 30. “Muharrem Ince has the right response.”

Ince does not mince his words in criticising what he says are the defects of Erdogan’s 15 year rule, pointing to a lack of freedom of expression, weak judicial independence, high inflation and his policy on Syrian refugees.

He also shows no fear in tackling Erdogan on issues that have become near taboo, notably the past cooperation between his ruling Justice and Development Party (AKP) and the US-based preacher Fethullah Gulen who Ankara blames for the 2016 failed coup and is now public enemy number one.

In the face of these attacks, Erdogan presents himself as a leader of experience and a presence on the international stage who has transformed Turkey with his infrastructure projects, blasting his rival as an “apprentice”.

“I am the commander in chief,” he declared.

According to Emre Erdogan, professor of political science at Bilgi University in Istanbul, the president’s mastery of the cut-and-thrust of political rhetoric has kept him in power and propelled him to successive election victories.

“Everyone thought that there was no one capable of standing up to Erdogan… but the performance of Ince has overturned this well-founded idea,” he said.

While Erdogan is known for setting the trend in Turkish politics, he has often seemed unusually reactive in this campaign, having to catch up with the electoral running set by Ince and the CHP.

Erdogan suddenly announced this week for the first time that he planned to lift the state of emergency in place for the last two years since the failed coup, but only after Ince and the CHP pledged he would end it within 48 hours of coming to power.