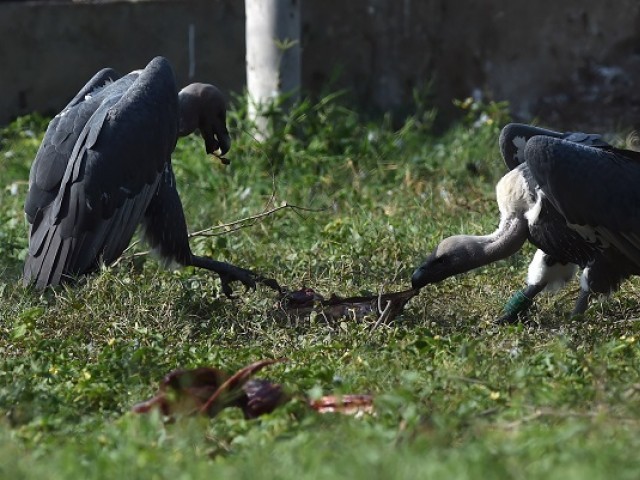 White-backed vultures eating meat in their enclosure at the Vulture Conservation Centre run by World Wide Fund for Nature-Pakistan (WWF-P) in Changa Manga, about 80km from Lahore. PHOTO: AFP

ISLAMABAD: The World Wide Fund for Nature (WWF)-Pakistan did not take relevant ministries on board during inception phase of International Labour and Environmental Standards application in Pakistan’s Small and Medium Enterprises (SMEs).

The European Union (EU) has committed to provide around 11 million euros for the project that started in 2016 and was likely to be completed in 2022.

The specific objective of the project was to promote the enforcement, implementation and compliance with the International Labour and Environmental Standards (ILES) by public and private sector institutions and organisations in Pakistan.

The project is to be implemented with partnership of Ministry of Overseas Pakistanis and Human Resource Development, Provincial Departments of Labour, Provincial Departments of Environmental Protection, Ministry of Climate Change, Pakistan Workers’ Federation, Employers’ Federation of Pakistan, industrial and trade associations from the textile and leather sectors and other trade unions.  While World Wide Fund for Nature- Pakistan is a partner to implement environment component of the ILES project in Pakistan.

According MoCC sources, now the Ministry of Overseas Pakistanis & Human Resources Development was pressing hard for MoCC’s input on the draft logical framework. “But how is it possible for government to give assent to the project logical framework at this stage after one-and-a-half year without any knowledge or involvement in inception of phase of the project?” the ministry sources said.

The matter came to light in March this year when ILO Chief Technical Advisor Caroline Bates gave a presentation in the meeting of the steering committee of the project titled The Logical Framework of International Labour and Environmental Standards. The presentation was about achievements during inception phase of the project that covered 18 months.

However, representatives of MoCC and ministry of commerce refused to give assent to the project logical framework of international labour and environmental standards for the reason that both ministries were not taken on board since the inception of the project.

The overall objective is to promote sustainable and inclusive growth in Pakistan by supporting the economic integration of Pakistan into global and regional economies and by improving compliance with labour and environmental standards and increased competitiveness.

The specific objective is the promotion and implementation of and compliance with international labour and environmental standards through the implementation, application and enforcement of national legislation and standards by the public and private sectors in Pakistan.

Assist public sector institutions, in consultation with social partners, to effectively strengthen, implement and enforce existing and new legislation and to promote respect for and compliance with international labour and environmental standards in Pakistan;

Assist enterprises in the textile and leather sectors, and their associations, to institutionalise the implementation of, and compliance with, national labour and environmental legislation.