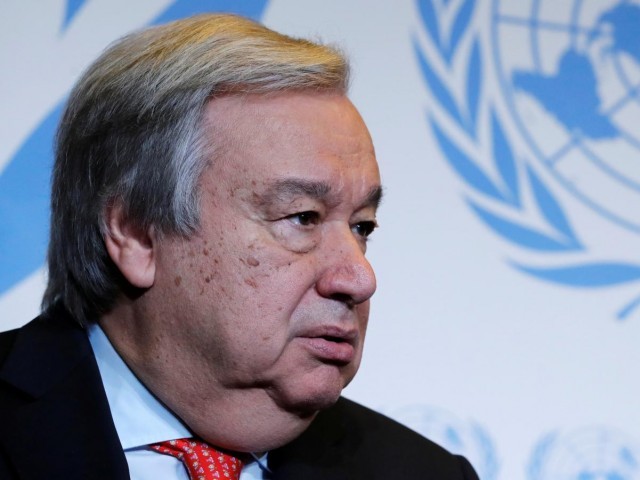 UNITED NATIONS: Debris from five missiles fired at Saudi Arabia by Yemen’s Houthi group since July 2017 “share key design features with a known type of missile” manufactured by Iran and some of the components were manufactured in Iran, UN chief Antonio Guterres wrote in a confidential report to the Security Council.

However, the United Nations has not been able to determine when the missiles, components or related technology were transferred from Iran and if they violated UN restrictions, Guterres said in a biannual report on the implementation of UN sanctions on Iran.

The June 12 report, seen by Reuters on Thursday, is a further blow to US efforts to hold Iran accountable over accusations it violated UN resolutions on Yemen and Iran by supplying weapons to the Houthis. In February Russia vetoed a western attempt to have the Security Council call out Tehran.

A proxy war is playing out in Yemen between Iran and US ally Saudi Arabia. A Saudi-led coalition intervened in Yemen in 2015, backing government forces fighting Iran-allied Houthi rebels. Iran has denied supplying the Houthis weapons.

The coalition pounded Houthi positions in Yemen’s Hodeidah for a second day on Thursday during a military assault aimed at seizing the main port to prevent the Houthis from bringing in missiles from Iran.

Iran told Guterres in a letter that it “neither has a policy nor seeks to transfer arms or military equipment in Yemen or manufacture them therein.” Independent UN experts separately reported to the Security Council in January that Iran had violated a separate sanctions regime covering Yemen.

Most UN sanctions imposed on Iran were lifted in January 2016 when the UN nuclear watchdog confirmed that Tehran fulfilled commitments under a nuclear deal with Britain, France, Germany, China, Russia and the United States. But Iran is still subject to a UN arms embargo and other restrictions.

“In both instances, the Secretariat is confident that some of the arms and related material it examined are of Iranian manufacture. However, it has found no indications of whether these items were transferred from the Islamic Republic of Iran after 16 January 2016,” he wrote.

The UN sanctions and restrictions on Iran are contained in a resolution that also enshrines the 2015 Iran nuclear deal, which US President Donald Trump withdrew Washington from in May. European powers have been scrambling to salvage the deal.