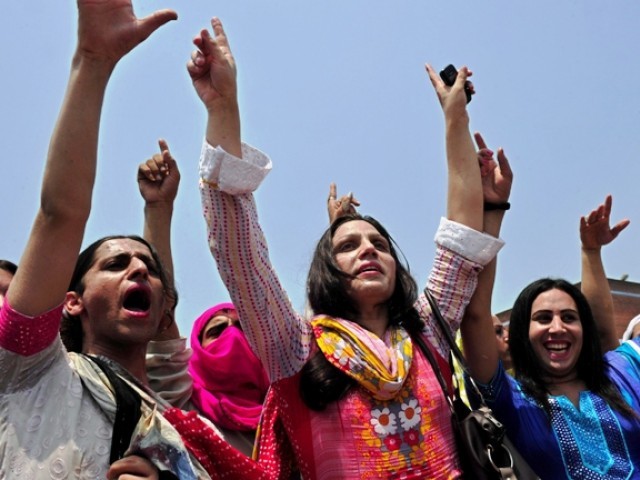 As the political climate heats up ahead of next month’s polls, people who are transgender have urged the apex poll body to ensure that members of their community can find representation in the democratic process and that there is zero tolerance for trans-phobia in the elections, including expulsion of candidates.

This was disclosed at a news conference at the Peshawar Press Club by members of APTEN Including TransAction, Sindh Transgender Welfare Network, Balochistan Alliance for Transgender and Intersex Community and Punjab Transgender Foundation.

The participants explained that the network had been formed to challenge the invisibility of people who are transgender from the political and electoral process of Pakistan.

Khyber-Pakhtunkhwa (K-P) TransAction President Farzana Jan said that given the power of presence, and the paucity of transgender role models in all spheres of life, the potential influence of having transgender identifying representatives, who can stand in the public spotlight and demonstrate the legitimacy, value, and dignity of transgender person lives and political claims are huge.

“Participation in political and public life is a critical element of socially inclusive development, along with the realisation of human rights,” said Nayab Ali, the focal person of APTEN in Punjab and a national assembly candidate from Okara. As many as 13 people who are transgender from across the country aim to contest next month’s general elections.

“Participation of transgender community in the public and political life can be an important means to give them a voice and enable them to take part and have a voice in decisions that affect their life, their community and country,” Ali added.

Qamar Naseem, a transgender rights activist said that the passing of the Transgender Persons (Protection of Rights) Act 2018, calls for the effective political and governmental commitments for the equitable and expeditious inclusion of people who are transgender in the electoral and democratic processes such as elections.

“We call upon the government to ensure that the transgender community in Pakistan has access to and enjoys its fundamental and constitutional rights without fear, stigma or discrimination,” Naseem said.

“Participating in the democratic processes can be of great significance and an important means of overcoming exclusion and discrimination and dismantling other barriers frequently faced by transgender persons,” said Nadeem Kashish, a transgender rights activist from Islamabad.

Lubna Lal a transgender candidate for the provincial assembly from Punjab said that while the right to participate in politics and public life is well-established in human rights laws, people who are transgender in Pakistan are frequently denied their rights to political participation in a variety of ways and for a variety of reasons, often the result of direct or indirect discrimination.

APTEN has urged the Election Commission of Pakistan (ECP) to familiarise itself with the barriers to political participation and public life for the transgender community and devise practical strategies for removing these barriers in the electoral process.

For this purpose, it has urged the poll body to devise a consultation mechanism with transgender rights groups at the national, provincial and district level and to use it consistently.

Moreover, it has urged the ECP to revise electoral and relevant legal frameworks for Tran’s inclusion and develop accessible and inclusive voter education. ECP officials must also be trained on gender inclusive elections and utilise election monitoring and observation to support inclusive elections.

The poll body was urged to ensure an accessible and responsive electoral complaints systems together with standards and guidelines for the accessibility of registration and polling centres. Further, it urged running special campaigns to educate transgender voters, with a special focus on first time young transgender voters.