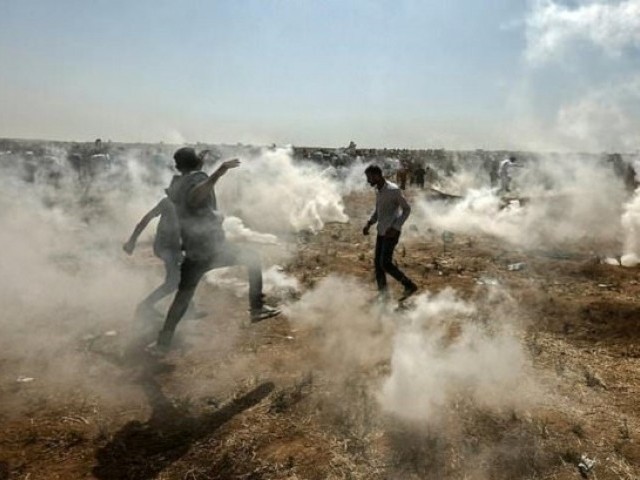 At least 129 Palestinians have been killed by Israeli fire during protests near the border with Gaza that began at the end of March. PHOTO:AFP

UNITED NATIONS: The United Nations General Assembly will vote on condemning Israel for Palestinian deaths in Gaza in a resolution fiercely opposed by the United States, which wants Hamas to face condemnation.

US Ambassador Nikki Haley slammed the Arab-backed measure as “fundamentally imbalanced” for its failure to mention Hamas and has proposed an amendment that condemns the Palestinian militant group.

“Any resolution focused on the protection of civilians in Gaza must recognise the destabilising and reckless actions of Hamas, which endanger the lives and livelihoods of innocent civilians,” Haley wrote in a letter sent to fellow ambassadors on the eve of the vote.

At least 129 Palestinians have been killed by Israeli fire during protests near the border with Gaza that began at the end of March.

US seeks UN vote on condemning Hamas over Gaza

The Arab-drafted text condemns Israel’s use of “excessive, disproportionate and indiscriminate force” against Palestinian civilians and calls for protection measures for Palestinians in Gaza and the occupied West Bank.

The 193-nation assembly will vote first on the US-drafted amendment condemning Hamas for “inciting violence” along the border with Gaza before the vote on the resolution.

Diplomats expect the US amendment to fail and the Arab-backed resolution to be adopted, but it remains unclear how many votes it will garner in the face of strong US opposition.

Arab countries backing the measure turned to the General Assembly after the United States used its veto in the Security Council to block the resolution on June 1.

The text was put forward by Algeria and Turkey on behalf of the Arab League and the Organisation of Islamic Cooperation.

The General Assembly last held a similarly contentious vote on the Israeli-Palestinian conflict in December, when it rejected President Donald Trump’s decision to recognise Jerusalem as Israel’s capital and move the US embassy there.

Haley had warned at the time that Washington was “taking names” of countries that supported the resolution. The vote was 128 to 9, with 35 abstentions.

Backed by Arab countries, the Palestinians are lobbying to win as many votes as those cast in support of the Jerusalem resolution.

Western diplomats however expect a large number of abstentions.

“Gaza is not Jerusalem,” said a diplomat, arguing that there is a stronger international consensus about the need for a negotiated settlement on Jerusalem than on who is to blame for the violence in Gaza.

Unlike the Security Council, resolutions adopted by the assembly are non-binding and there is no veto.

The outcome will provide an indication of global opinion on the Israeli-Palestinian crisis as the Security Council remains deadlocked on how to respond to the violence.

Israel and Hamas have fought three wars in Gaza and the United Nations has warned that a fourth conflict could be easily ignited.

The resolution would task UN Secretary-General Antonio Guterres with the drafting of proposals for an “international protection mechanism” for the Palestinians in Gaza and the occupied West Bank.

These could range from setting up an observer mission to a full-blown peacekeeping force, but action on any option would require backing from the Security Council, where the United States has veto power.