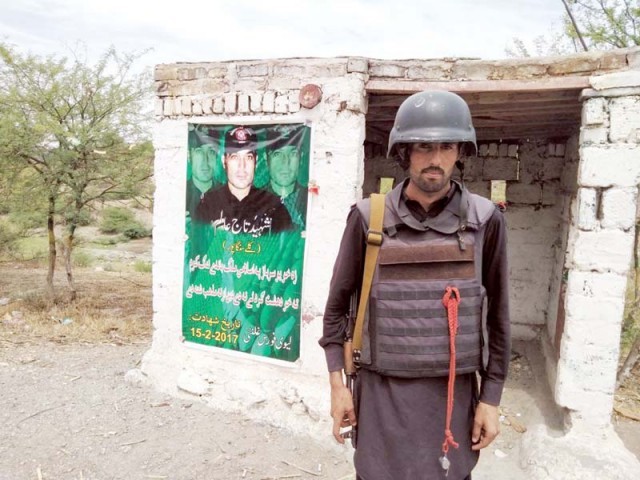 A paramilitary man stands at a defunct picket in Mohmand for local tax collection. PHOTO: EXPRESS

GHALLANAI: As the day dawned in Mohmand on Monday after a weekend that felt like a different world away, the residents of the area woke up to the reality of what it means to be a recognised district of the country rather than just be a federally administered territory.

Moreover, the K-P chief secretary in a separate notification on Friday had abolished the agency development fund — which the agency raised by imposing various taxes and levies to fund their day-to-day operations, including maintaining law and order.

On the morning of June 11, however, residents saw that they had suddenly been transported into a different realm.

The pickets set up for collecting taxes on items being brought into the district were only manned by the Khasadars, overseeing security on the main roads. The administration also removed the boards displaying the schedule of taxes.

Even the area’s largest natural resource, marble — subject to heavy taxation and cess in the past — too was allowed to pass without any tax.

But there were some remnants of the old system still available, including signboards announcing the offices of the political agent and the assistant political agent along with other office boards with the Fata nomenclature intact.

Officers present at the offices suggested that it will take time for the things on the ground to catch up with the new reality, adding that they were planning on redesigning these boards according to the new notification.

An official at the main office in Ghallanai, who was still using the old stamp from when the district was still a tribal agency, said that they would most likely have to change the stamp.

However, he added that since the new orders were only issued on the weekend, they did not have time to change the stamps. Moreover, he said that they too are awaiting directives for their new duty assignments.

To make matters worse, he said that they have not been provided with any guidelines thus far on how to work as an official of the district government and that they had to frequently refer to the Fata or the provincial secretariat about the changes.

As the merger takes root, a large number of tribal elders from Mohmand thronged the offices of the former political agent and the new DC, Wasif Saeed.

When asked about their meeting, Malak Sahibdad said that they met to bid Saeed farewell as the last PA of Mohmand agency.

Sahib Dad told The Express Tribune that tribal elders used to be an integral part of the former system under the past regime, including in maintaining law and order in the area.

But with the prospect that police will now be deputed in the area, Dad said that the tribal elders were bidding farewell to their working relationship with the PA and to entrust the DC with the responsibility of maintaining law and order.

Dad, though, was apprehensive of the DC’s ability to control crime in the area in the absence of any formal policing structure. He pointed out that alternative security forces in the region were not capable of maintaining law and order.

Another tribal elder expressed concerns over the abolishment of the agency development fund.

Malak Amir Khan said that tribal communities used to be assigned security duties by the political agent. In return for providing these services, he explained, the political administration provided them with a package of perks and privileges – mostly paid from the agency development fund. But with the fund gone, he was worried what would happen to those payments.

He added that they were always taught to respect the PA. But with the PA position standing abolished, they were wishing him farewell.

Amir added that as a DC, Saeed will not have the same power he enjoyed as the PA.

When asked about reservations of tribals over the change in the system, he complained that their voices were not heard.

Like in many other parts of the country, residents of Ghallanai were worried about the supply of drinking water in the area.

Residents said that previously, the PA used to supply water to residents using the agency’s water tankers. But with the change in system and abolishment of the agency fund — which paid for the tankers, they were unsure who was going to pay for supplying the water in the area.

Similarly, a generator in the PA’s office, which used to run when the power was cut for load shedding, lay silent on Monday.