But the ban on buying US parts will not be lifted until the compan­y pays the fine
By Reuters
Published: June 12, 2018
Tweet Email 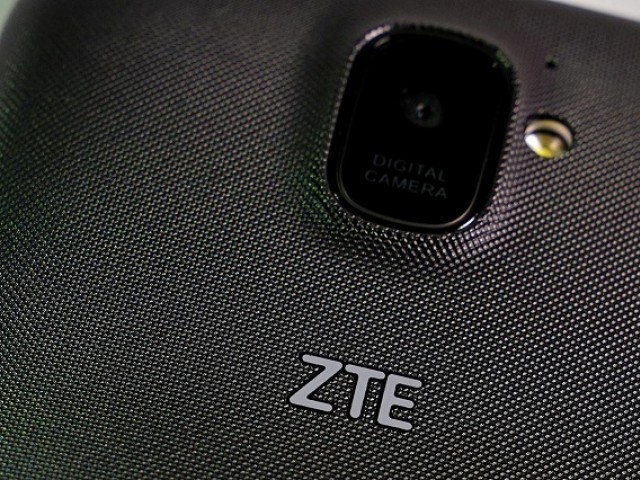 A ZTE smart phone is pictured in this illustration taken April 17, 2018. PHOTO: REUTERS

WASHINGTON: ZTE settlement with the US Commerce Department that would allow China’s No. 2 telecommunications equipment maker to resume business with US suppliers was made public on Monday, days after the company agreed to pay a $1 billion fine, overhaul its leadership and meet other conditions.

But the ban on buying US parts, imposed by the department in April, will not be lifted until the company pays the fine and places $400 million more in escrow in a US-approved bank, the agency said.

ZTE did not immediately respond to requests for comment on Monday.

ZTE, whose survival has been threatened by the ban, secured the lifeline settlement from the Trump administration on Thursday.

White House trade adviser Peter Navarro said on Sunday that President Donald Trump agreed to lift the ban as a personal favor to the president of China.

ZTE must replace the boards of directors of two corporate entities within 30 days, according to a 21-page order signed June 8 and published on Monday on the Commerce Department website along with the settlement agreement.

All members of ZTE’s leadership at or above the senior vice president level also must be terminated, along with an executive or officer tied to the wrongdoing.

On June 1, Reuters exclusively reported on the monetary penalty and other terms demanded to reverse the ban. Reuters on Tuesday revealed that ZTE had signed a preliminary agreement with the Commerce Department.

ZTE pleaded guilty last year to conspiring to evade US embargoes by selling US equipment to Iran. The ban was imposed after the company made false statements about disciplining some executives responsible for the violations. ZTE then ceased major operations.

Under the settlement, ZTE will pay a total civil penalty of $1.7 billion, including $361 million already paid as part of a March 2017 agreement, the $1 billion fine and the $400 million that will go into escrow.

US lawmakers have attacked the agreement and planned legislation to roll it back, citing intelligence warnings that ZTE poses a national security threat.

The Senate is due to vote as soon as this week on legislation that would block the settlement agreement, included as an amendment to a must-pass defense policy bill.

As part of the order, ZTE must identify in detail to the Commerce Department all Chinese government ownership and control of ZTE, including public and private shares.

The department also will select a monitor, known as a special compliance coordinator, within 30 days to report on compliance by ZTE and its affiliates worldwide for 10 years. The coordinator will have a staff of at least six employees funded by ZTE.

A separate monitor was appointed to a three-year term by a US federal court in Texas last year. Under the deal, ZTE also agreed to allow the U.S. government easier access to verify the company’s shipments for items subject to the regulations.

In addition, within 180 days, ZTE must post calculations of the US components in its products on its website in Chinese and English.

ZTE is not allowed to take any action or make any public statement, even indirectly, denying any of the allegations.