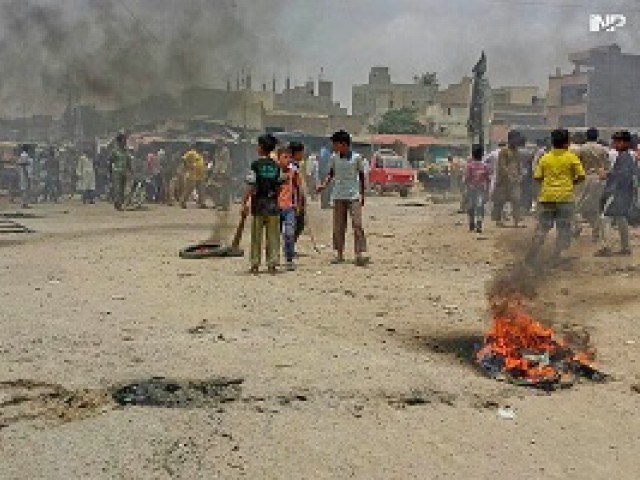 KARACHI: A large number of Orangi Town residents took to the streets again on Tuesday, demanding their problems pertaining to civic amenities be solved.

Orangi Town, which falls in the District West, has been facing a severe water crisis for the past month. Residents of Islam Chowk in Orangi Town blocked the road between Orangi No 11 and 12 and traffic came to a halt for around three hours. The area is deprived of water for the past 20 days.

“We do not even have water in mosques for wuzu [ablution],” said a young protester, Muhammad Ali. “It has been 20 days now. Enough is enough.”

The protesters burnt tyres on the road and chanted slogans against the Karachi Water and Sewerage Board (KWSB) and the Pakistan Peoples Party-led Sindh government.

Breaking the windows of a Mazda bus, the residents attempted to set the bus on fire, which was squashed by the police.

“Water is released when there is no electricity in the area. They have kept us without water even in Ramazan,” said a resident, adding that fasting has become extremely difficult as electricity and water is not available at sehri and iftar time.

Despite countless complaints, no action is being taken, he said.

Another female protester, Sania Bibi, said that its election time. “With what face these politicians come and ask us for votes?” she questioned, asking the politicians to spend one day with the residents of Orangi Town and see how miserable their lives have become due to water shortage. “We do not even have water to drink,” she said.

The situation has become so bad that there are reporters of water distribution on ethnic grounds by the KWSB, which Ali termed as “alarming”.

Areas of East and South districts are also adversely affected. In Mehmoodabad, water supply is at a halt. Water supply to Azam Basti has been suspended from the water pump in Mehmoodabad.

“Thousands of gallons of water is being wasted on roads due to suspension of water supply,” said Ali Asghar, a resident.

When The Express Tribune visited the area, the water line was seen leaking.

Asghar asked why the KWSB has halted the water supply to their area and are not repairing the faulty water lines.

Most of the areas of Central and West districts are provided water from the Hub Dam, where according to the KWSB spokesperson, Rizwan, hardly 35 million gallons per day (MGD) of water is being supplied to the city.

The overall requirement of the city is 1,200MGD and the city is getting less than half of it, that is 500 MGD water, which includes supply from the Hub Dam.

For Orangi Town, Rizwan said the area is at the tail end due to which it is facing problems. When asked about the water shortage in Azam Basti and illegal connections to the industrial area, Rizwan did not comment.