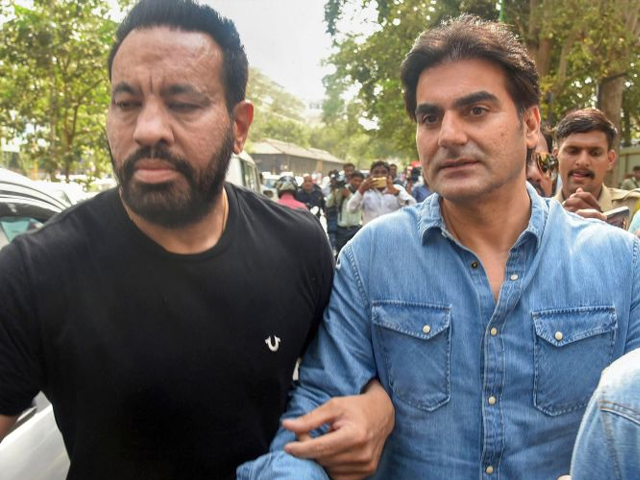 In a shocking development, Bollywood actor Arbaaz Khan has not only admitted to betting in the Indian Premier League (IPL) but also to losing a large amount in the just concluded series, official sources said.

His confession came before a team of Thane Anti Extortion Cell (AEC) which is probing the IPL betting scam since the past five-six years involving several billions of rupees.

Arbaaz, 50, who was summoned before the AEC, was confronted with a prominent bookie Sonu Jalan, 41, alias Sonu Batla, who was arrested five days ago from Thane, besides four other bookies nabbed late last month.

Salman Khan back in Indian court in blackbuck killing case

During his interrogation, the name of Khan cropped up besides some handwritten diary entries and a picture of the producer-actor with Jalan and others allegedly involved in IPL betting.

“Earlier, Khan placed small bets just for fun and there was no monetary transaction between him and Jalan,” said an officer from the police department, reported Times of India.

Police said Khan has told them that Jalan never showed him any accounts and would give him special treatment.

“Though Jalan kept records of Khan’s wins and losses, no money changed hands. It was only after a spate of losses that there was an argument between the actor and Jalan. After this, Jalan started harassing him to accompany him to various events like local Ganesh mandals and Holi festivities so that he could flaunt his Bollywood connections and gather more clients,” added the officer.

Bollywood shudders at Salman Khan’s arrest, with projects over INR6 billion at stake

As his family disapproved of betting, Khan reportedly snapped contact with Jalan couple of months ago. “Khan has told us that since he cut off contact with Jalan, the latter had been blackmailing him to resume betting,” the officer added.

Speaking to media outlets, Khan said, “I had come to record my statement and I will continue to cooperate with the investigation.” Police said they may summon Khan again if needed. Meanwhile, two more names — a bookie, Dilip, and a producer — have cropped up. Police refused to divulge details about the producer.

The controversial life of Salman Khan

Khan admitted to betting a huge amount in the IPL series, that concluded on May 27, and losing an even bigger amount, estimated to run into several millions of rupees, but officials remained tightlipped on the exact figures.

Honouring the police summons issued on Friday, Arbaaz reached the AEC office in Thane on Saturday to record his statement, in which he has reportedly named several other Bollywood personalities who indulge in betting large amounts in IPL.

Thane AEC Chief Pradeep Sharma is likely to make a detailed statement on the developments in the case later this evening.