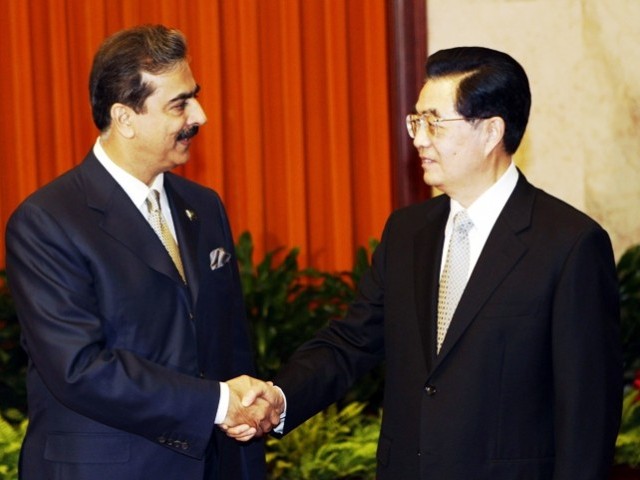 Pakistan's Prime Minister Yusuf Raza Gilani (L) shakes hands with China's President Hu Jintao during a meeting at the Great Hall of the People in Beijing May 20, 2011. PHOTO: REUTERS

Cornered on the global stage, Pakistan received an official show of support on Friday with China reiterating its support for Islamabad’s efforts in the war on terrorism, stressing that Pakistan’s territorial sovereignty should be respected.

In a joint statement with Pakistan marking the end of Prime Minister Yousaf Raza Gilani’s widely observed trip to Beijing, China said it “recognised the tremendous efforts and the great sacrifice that Pakistan has made in fighting terrorism.”

The joint statement with China came at a time Pakistan faced unprecedented pressure from Washington and its allies, which had begun to point an accusatory finger at Islamabad after Osama bin Laden was located on its soil.

The statement also said that the two sides shared the view that terrorism, separatism and extremism pose serious threats to regional peace, stability and security, and reaffirmed their resolve to undertake “substantive cooperation” under bilateral and multilateral frameworks, and jointly fight the three forces.

Pakistan reiterated that it would never to allow its territory to be used to attack any country and will continue to support international counter-terrorism cooperation, the statement said.

According to the statement, China said it is “firm on the policy of pursuing friendly ties with Pakistan” and Pakistan stressed that pursuing friendship with China is the “bedrock of Pakistan’s foreign policy and enjoys national consensus.”

The Chinese side expressed appreciation for the longstanding, firm support of Pakistan on issues that concern China’s core interests. The Pakistani side appreciated the strong support and selfless assistance of the Chinese government and people.

“The Chinese side reiterated that it believes Pakistan’s sovereignty, independence and territorial integrity should be respected and its efforts for promoting peace and stability in South Asia should be recognised and supported,” the statement said.

The Pakistani side reiterated its firm commitment to the one-China policy and support for China’s reunification, it said.

The statement said the two sides will prioritise intensifying cooperation in infrastructure, energy and agriculture.

The two reiterated they will continue to enhance cooperation in military and security for peace, security and stability of the two countries and the region.

Chinese President Hu Jintao on Friday saluted Pakistan’s prime minister as an “old friend” of Beijing, and reiterated upon the world community that Pakistan’s sacrifices in the war on terror must be acknowledged.

On Friday, before their talks at the Great Hall of the People, Hu said Gilani’s visit would “certainly give a strong boost to the good neighbourly friendship and mutually beneficial cooperation” between the two countries.

He repeated the belief during the one-hour meeting at the hall, where matters of bilateral interest as well as the regional situation were discussed.

He said that Hu also called upon the international community to help Pakistan combat extremism and terrorism. “Pakistan is an important country in the region and has a unique role in promoting reconciliation and development in Afghanistan,” Bashir quoted Hu as saying.

“China is willing to strengthen the security dialogue and cooperation with Pakistan to jointly fight the “three forces” (terrorism, separatism and extremism),” Hu told Gilani.

Prime Minister Gilani thanked the Chinese president for his country’s support to Pakistan after the Abbottabad incident.

Thanking President Hu for the hospitality extended to him and his delegation, the prime minister said that it was always an honour to visit China.

The leaders congratulated each other on the completion of 60 years of Pakistan-China friendship and discussed way to further strengthen the relationship and cooperation between the two countries, particularly in areas of infrastructure, energy and agriculture. (With input from wires)

PTI to ‘dharna’ in Karachi’s streets