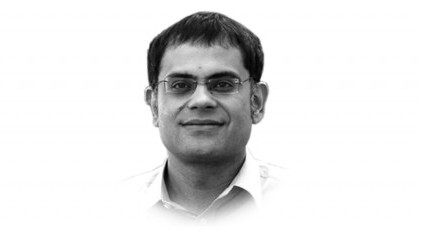 The writer is consulting editor, The Friday Times (raza.rumi@tribune.com.pk)

The massacre of Ahmadis in Lahore has once again exposed the inner fissures of our society. As if treating them like second class citizens was not enough, the attacks on their private space of worship has confirmed that militant Islamism is now an embedded reality. Those who have been denying the presence of Punjabi Taliban will have to construct another web of denial and disbelief. We saw signs of that after the fateful tragedy. Instead of constituting investigation teams and ensuring that all necessary leads are collated, senior officials of the Punjab government made a direct reference to RAW, the infamous Indian intelligence agency.

That the terrorists can attack anyone and anywhere is now an established reality. The fact that they chose Lahore and a vulnerable community is a clear message. Indeed, Pakistan as a state should reconsider its goals and strategy of survival. The symbolism of the day chosen for the heinous mass murders is also significant. It was Yaum-i-Takbeer when Pakistan’s atomic prowess was proved on the global stage. Perhaps the greatest delusion of the state’s might and invincibility seems to have been blown to bits. The process of bigotry that started in the 1950s culminated in Zulfikar Bhutto’s tragic action of declaring Ahmadis as non- Muslims in 1974. The Zia years deepened this culture of intolerance. Whilst we may have secured our ‘external defence’ through the much touted nuclear deterrence, internally Pakistan and its hapless citizens are more vulnerable than ever. Fundamentalism is a cancer that has widely spread in the body politic. Yet few wish to tackle it. For the past two years, get-Zardari debates have dominated Pakistan’s public discourse punctuated by the anti-Americanism of the right. The interior minister has been portrayed by the media Taliban as a corrupt nincompoop; and blood thirst for him is evident from the news pages and TV screens. Taliban apologists cannot confront the military establishment directly but the truth is the fight against the Taliban requires political stability and a domestic consensus. The right of Ahmadis to worship and lead a normal life according to the Constitution of Pakistan has been violated. What should a community do when the state and non-state actors are all geared to hound them? Is this Jinnah’s Pakistan? No.

We have gone too far and pessimists are now saying that the process of destroying Pakistani society is irreversible. There is still hope that we shall overcome this menace if Pakistani public opinion is fashioned to look a little deeper inside and not find all sources of evil in Washington or Delhi. The electronic media has a critical role to play but lack of self-regulation and introspection is missing. If anything, we find more and more analysts and commentators siding with the militants. Pakistan’s fight against terrorism has entered a new, decisive phase. If the political forces are not going to unite against this menace then they should learn a lesson or two from history. The secular and moderate political parties will be the obvious victims of this menace. Similarly, Pakistan’s military establishment needs to revise its paradigm of national security. If the offshoots of Taliban and al Qaeda are going to destroy Pakistani society and further incapacitate the state then what good are nuclear weapons and state-of the- art equipment? Clearly, there is a need for concerted action now. Political mobilisation against terrorism, involvement of moderate religious leaders and media campaigns must precede further military action in the north. We cannot let Taliban sympathisers run media campaigns and interfere in state operations.

Most importantly, the governments at the federal and national level need to acknowledge that the state and its civilian institutions have lost their core capacities due to decades of misgovernance. Police reform and reorganisation of intelligence agencies is perhaps most vital at this juncture.

The battle for Pakistan’s survival cannot be lost. This is the only country we have.

Sending the fanatics a clear message