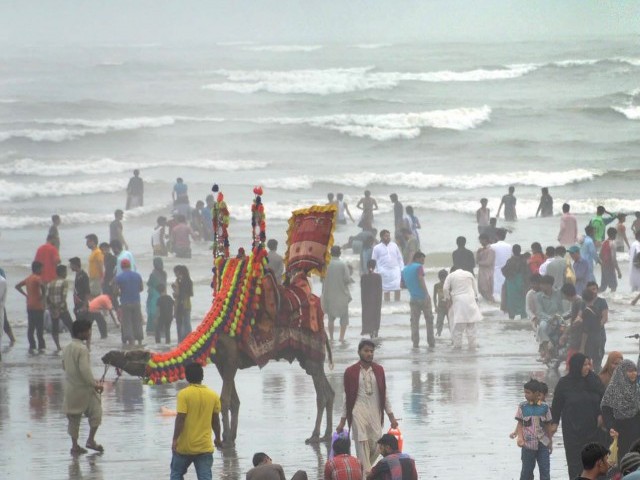 The judicial commission barred the DHA from allowing private restaurants along the beach to continue releasing sewage into the sea. PHOTO: MOHAMMAD NOMAN/EXPRESS/FILE

KARACHI: The Supreme Court-mandated judicial commission on water and sanitation has summoned the federal defence secretary or his nominee after an undertaking submitted on the secretary’s behalf failed to satisfy the commission.

An additional attorney-general, Salman Talibuddin, submitted on Monday the undertaking, outlining measures to end pollution on the Sea View beach and supply drinking water to the residents of Defence Housing Authority (DHA) in Karachi.

“This commission is of the view that in the absence of [the] secretary defence or any of his nominee, the issues of sewerage and water distribution cannot be resolved,” observed the commission’s head, Justice (retd) Amir Hani Muslim. The secretary was directed to either appear himself on June 4 or send his nominee who should not be below the rank of joint secretary.

The commission had earlier taken notice of the discharge of untreated sewage from different locations through Sea View and its consequences on the health, environment and marine life. On May 15, Justice (retd) Muslim had summoned the defence secretary and later directed the official to submit an undertaking.

During Monday’s proceedings, the commission was informed by Karachi Water and Sewerage Board (KWSB) Managing Director Khalid Mehmood Shaikh that it was difficult for the KWSB to supply water to various cantonments. He opined that intervention of the defence ministry was required.

The judicial commission barred the DHA from allowing private restaurants along the beach to continue releasing sewage int0 the sea. “… not a single drop of untreated sewage shall be drained into the Sea View [beach].”

The restaurants were directed to transport the sewage to the treatment plant located in DHA Phase VIII. “This shall start immediately and in case any restaurant fails to do so, that shall be restrained from functioning forthwith,” the commission decreed.

In the meantime, the DHA was asked to connect sewerage lines of those restaurants with the sewerage infrastructure of DHA Phase VI. The authority was directed to complete this work within two months and submit a compliance report.

DHA told to set up treatment plants by December

The commission also heard Planning and Development Board Chairperson Mohammad Waseem and K-IV Project Director Asad Zamin. Justice (retd) Muslim directed them to submit separate PCs for the project’s components that were missing in the PC-1 of the K-IV project.

Zamin informed the commission that PC-1 of ancillary services and missing components would be prepared by the end of next week and then submitted to the local government department. The project is meant to supply additional 260 million gallons of water per day from the Indus River to Karachi. It is being executed by the Frontier Works Organisation under a joint funding by the federal and Sindh governments.

The KMC and KWSB were directed to utilise the betterment charges for supply of clean drinking water, sanitation and firefighting.