AEDB, in consul­tation with NEPRA, needs to frame policy to promot­e this new concep­t
By SYED AKHTAR ALI
Published: May 28, 2018
Tweet Email 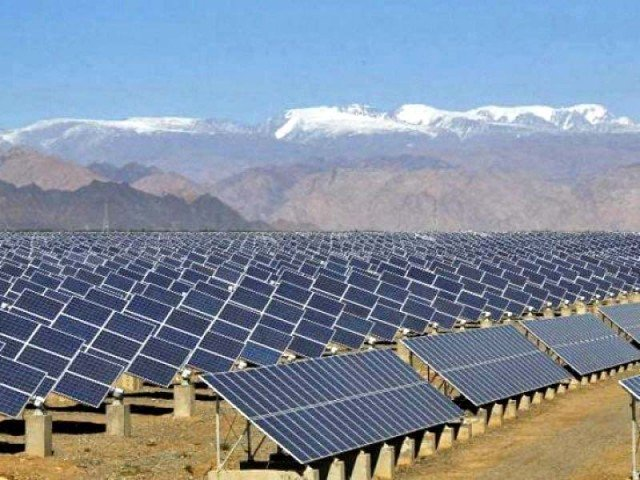 Western Balochistan has many sites where hybridisation is possible due to availability of both wind and solar resources of high quality. PHOTO: EXPRESS

ISLAMABAD: Solar-wind hybrid means integration of solar and wind energy production by installing both solar and wind power plants at one piece of land or at nearby plots utilising common transmission facilities.

India has released a policy in this respect recently and a captive hybrid project has been commissioned there. In Pakistan also, several investors are examining the feasibility of this useful mode of power generation.

Solar and wind power suffers from intermittency and variability. In simple words, Sun shines in the day and wind starts blowing in the afternoon and continues till past midnight, but mostly in summers. In western countries, it is the opposite where wind blows hard in winter coinciding with their peak energy demand.

Thus, solar covers one part of the daily peak demand and wind covers the second peak at night hours. In summers, it is handy for us.

It is said that some 25% of the costs goes into land and transmission which is saved in the hybrid concept. Transmission facilities are under-utilised in case of individual solar and wind plants proportional to their capacity factors – solar 17% of the time and wind about 35% of the time.

Hybrid accumulates it to the sum of the two minus some overlapping portions. Thus, it is not uncommon to get a capacity factor (utilisation) of 45% to 55% which is a much improvement.

Investment per megawatt remains low with weighted average of the individual investments minus land cost plus some additional investment in batteries.

It has often been wondered as to why this very useful concept has not been adopted in advanced countries by now. The answer is perhaps the requirement of battery storage, which has been expensive and its cost has come down to somewhat affordable levels only lately along with availability of right technology.

In Pakistani wind sites and new technologies, the capacity factor of 45% is becoming possible, giving even better opportunities. Hybrid power plants should have a lower capital expenditure per megawatt as well as lower production cost.

Unfortunately, Punjab lacks wind power resources. Hybridisation will be possible in Sindh (Jhimpir and Gharo) and in Balochistan. Western Balochistan has many sites where hybridisation is possible due to availability of both wind and solar resources of high quality.

In the context of Gwadar, this hybridisation possibility may be of special importance. Gwadar today suffers from both lack of water and energy. At present, a coal power plant of 300MW is proposed to be installed.

An alternative concept could have been a hybrid solar-wind power plant with some addition of oil-fired power plant. However, one cannot continue proposing and contesting new concepts.

Some enthusiasts tend to suggest that all wind sites should be hybrid as a matter of policy which I find rather too ambitious. Despite the potential, the world wind power industry has not caught on the bandwagon of hybrid.

Hybrid may also be promoted at kilowatt level in schools, hospitals and other institutional buildings in wind power corridors like Hyderabad and around in Sindh and western Balochistan like Turbat etc.

Ten-to-twenty-kilowatt facilities can be installed at such locations in combination with roof and ground space and its main advantage is almost round-the-clock availability in half part of the year, as mentioned earlier.

This is high time that a policy is announced by the Alternative Energy Development Board (AEDB) in consultation with the National Electric Power Regulatory Authority (Nepra) and other stakeholders. Policy need not be heavy or verbose. There are a few points that should be elucidated. However, the normal wind and solar power is suffering due to policy confusions and the CPPA-G’s reported incapacity to honour ensuing capacity payments.

Also under deliberation is the reverse auction of the projects that has been instrumental in bringing down solar and wind tariff in India and elsewhere.

As only a few days are left before the completion of term of the current government, the new administration will have to tackle these issues, whenever it comes on the saddle.

However, nobody would stop the bureaucracy to start working on the allied issues in the intervening period, although mostly foreign consultants of international financial institutions (IFIs) make the policies or prepare background papers in most cases. Reverse auction has been pending precisely for this reason.

Centre less inclined to spend on development projects in provinces