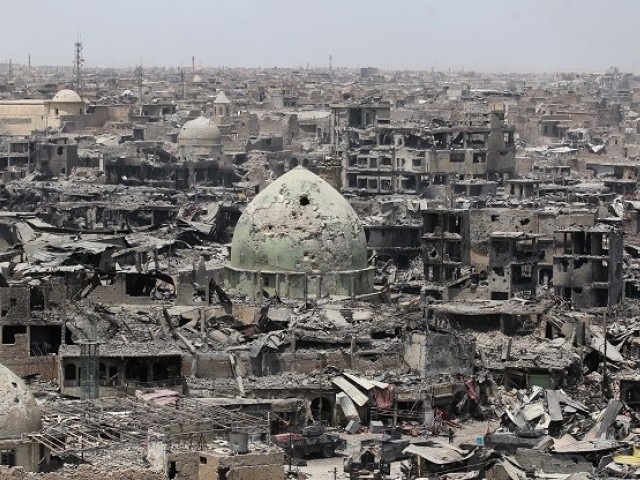 A general view of the destruction in Mosul's Old City. PHOTO: AFP

MOSUL, IRAQ: A group of Iraqi university students have found a cause in the ruins of Mosul.

They are salvaging what is left of its rich heritage, clearing rubble and distributing aid in a city crying out for help after the war against Islamic State.

The project began when Raghad Hammoudi and a group of students decided to launch a campaign to help rebuild the Central Library of Mosul University, burnt and bombed in the war. Its vast contents had been all but lost. But they found buried under layers of ash some 30,000 books almost intact.

Over 40 hot days, with the war still raging on the other side, the students moved the books one by one using holes made by rockets to carry them to safety. “An entire city with a glorious past and ancient history lost its heritage and culture: the tomb of the Prophet Jonah, the minaret of AlHadba which is older than Iraq itself. It is great that we were able to save a part of this heritage,” said Hammoudi, 25, a nursing student.

Both the leaning minaret of AlHadba , part of the 12th century Grand alNuri Mosque, where in 2014 Islamic State’s Abu Bakr alBaghdadi declared a caliphate, and the ancient tomb of what is believed to be the Prophet Jonah were destroyed in the military campaign to retake the city.

Hammoudi says among the books salvaged were some handwritten by Mosul scholars. They included editions written in Moslawi, the distinct dialect of the region once known as a center for scholarly Islam and the pride of many for its ancient mosques, churches and Old City architecture.

US denies allegations it gave rise to Islamic State in Afghanistan

Elsewhere, volunteers cleared rubble and garbage, opened
roads, drilled water wells and distributed aid. “The situation in Mosul is so much better now and this is because of the revolution that happened within Mosul, within its young people,” she said.

After living under Islamic State’s strict rule and then the
war to retake the city, young women feel as though they have
been liberated. The team that set out to rescue the books was mixed, a
rarity in Mosul’s society, where mingling between sexes outside
the family or university was limited even before Islamic State. “An unbelievable barrier has been broken, it might be a
trivial thing for the rest of the world but for Mosul it is
huge,” she said. Months after Iraq announced full control of the city, life
is back in many parts. But much of the Old City, where the last
and the bloodiest battles were waged, is still in complete ruin. Diyaa Al Taher, a resident who is helping rehabilitate homes, says most people, despite being impoverished, have returned to neighborhoods where the rubble has been cleared.

However, there are entire areas that are completely deserted. Corpses fester under debris. “Poverty can do more harm than Islamic State. If the city remains like this and the poor can’t find anything to eat, they will do anything,” said Taher, 30.

Taher says his target is to rehabilitate 1,000 homes and has so far finished rehabilitating 75, relying solely on donations from locals. Taher is regularly stopped by locals asking for help. He points to a collapsed home where an entire family was killed. “Their belongings were taken to be sold for charity,” he said, skipping over the stream of sewage that split the road.

Marwa AlJuburi,25, a divorcee, was one of the first to
volunteer as soon as she and her family escaped the fighting. “It was a miracle that we even made it. From then on I refused to accept to stay at home anymore. I refused to be silenced and I haven’t since,” she said.

She says she had to overcome stigma both as a woman and a
divorcee to carry out the work. She runs activities for children and helps coordinate access to medical care and equipment for families. Her team organized the opening of a park previously used as a military training ground for the fighters who ruled the city for three years.

Al Juburi, who is still haunted by images of the night of their escape, says even if Mosul is rebuilt, people need help to get over the mental toll. “In the end, the city will be rebuilt, even if it takes 1,000 years. But if the mind is destroyed, then the city will be lost with no hope of resurrection.”