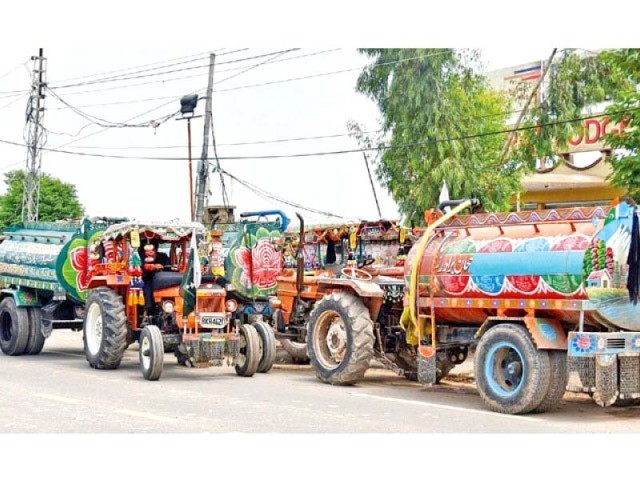 RAWALPINDI: Several city and cantonment areas are facing acute water shortage and the residents complained that they are not being supplied adequate water supply in Ramazan.

The residents of these areas complained that they do not get adequate water supply as its consumption increases many time in summer season and water scarcity come up every year. Crowd can be seen at water filtration plants because several areas were reported without water for many days but the authorities concerned are making just verbal claims of sufficient supply and even providing water by tankers also.

The residents of different areas suffer most as they have to buy water from the tanker mafia who charge them at their will in the holy month of Ramazan. The owners now demand Rs800 to Rs1,000 for a water tanker, which was supplied for Rs500 before the shortage.

The areas around Peshawar Road, including Afshan Colony, Saddar, Misrial Road and Kohinoor Mills, besides Chungi No 22 and surrounding area are also facing shortage.

Farooq, a resident of Chungi 22 said there was no water in his street and nearby localities and he had to spend Rs1,000 for arranging a private water tanker. Ali resident of Misrial Road said the residents of the area were facing acute water shortage. “We have to buy water from tanker mafia at exorbitant price.”

The situation in the city is not different as the shortage of water supply to several areas has made lives of the residents miserable. The residents complained about the water shortage in Dhoke Hassu, Dhoke Ratta and adjoining areas.

Haji Iqbal, Abdul Waheed, Tanveer Iqbal and others said the residents are facing great difficulties due to water shortage but the authorities concerned are paying no heed towards the resolution of the issue. A large number of complaints have been registered but the water supply situation could not be improved, they added.

They informed that there is no regular water supply for their areas and the department of water supply was playing a role of silent spectator. The citizens said that the authorities have failed to ensure regular supply in accordance with the demand of water, thus the residents are facing hardships to get clean water for drinking and other domestic use.