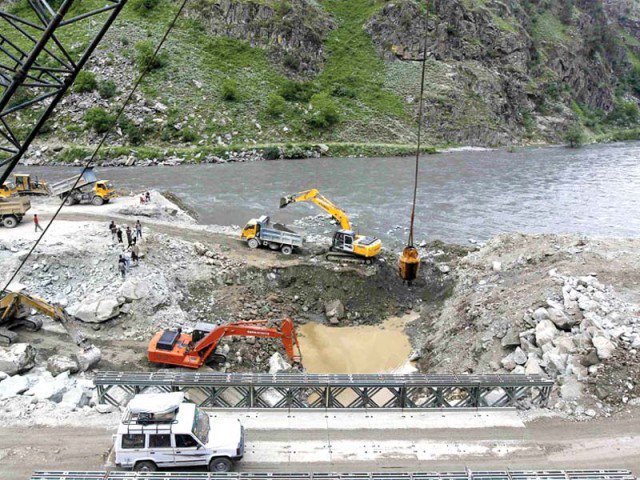 A private vehicle crosses a bridge as excavators are used at the dam site of Kishanganga power project in Gurez, 160 km north of Srinagar. PHOTO: REUTERS

ISLAMABAD: Pakistan and the World Bank have failed to reach an agreement on a way forward to address the former’s concerns over violation of the Indus Waters Treaty by India, as a strong Indian lobby in Washington again frustrated the latest push to stop New Delhi from violating the treaty.

“An agreement on the way forward was not reached at the conclusion of the meetings” between the Pakistani delegation and the World Bank officials, announced the Washington-based lender on Wednesday.

It added that several procedural options for resolving the disagreement over the interpretation of the Indus Basin Treaty’s provisions were discussed by both the parties.

“While an agreement on the way forward was not reached at the conclusion of the meetings, the World Bank will continue to work with both the countries to resolve the issues in an amicable manner and in line with the treaty provisions,” stated the World Bank.

But a Pakistani official who attended the meetings claimed that the World Bank has assured to bring resolution to the longstanding dispute. He added that Pakistan lodged the protest in the strongest possible words.

Senior World Bank officials met on May 21-22 with a delegation from the government of Pakistan at their request to discuss the issues regarding the Indus Waters Treaty and opportunities within the treaty to seek an amicable resolution.

The delegation of the Government of Pakistan also shared with the bank their concerns about the recent inauguration of the Kishanganga hydroelectric plant.

The Kishanganga project has the potential to disrupt flows, which will also adversely affect the recently constructed 969MW Neelum-Jhelum hydropower project.

Pakistan has maintained that the dam violates the World Bank-mediated treaty on the sharing of the Indus River and its tributaries upon which 80% of its irrigated agriculture depends.

Over the years, successive governments kept a blind eye over a growing Indian influence in international financial institutions. The governments have been sending retired and serving bureaucrats from the Pakistan Administrative Service (PAS) Group to fill technical posts in these important global bodies, which affected the country’s position.

The post of senior adviser to the IMF executive director is vacant for last over one year due to tussle over appointment of a blue-eyed PAS officer in Washington.

In particular, the role in relation to ‘differences’ and ‘disputes’ is limited to the designation of people to fulfill certain roles when requested by either or both parties, it added.

The World Bank underlined that the Indus Waters Treaty was a profoundly important international agreement that provided an essential cooperative framework for India and Pakistan to address current and future challenges of effective water management to meet human needs and achieve development goals.

“The World Bank remains committed to act in good faith and with complete impartiality and transparency in fulfilling its responsibilities under the Treaty, while continuing to assist the countries,” according to the handout.

In 2016, Pakistan had filed a complaint with World Bank, saying India had contravened the Washington-based lender-mandated pause placed in 2016 by completion of the Kishanganga Dam.

The Hague-based International Court of Arbitration had ruled in favour of India and allowed New Delhi in 2013 to go ahead with the construction of the Kishanganga hydro power project.

The Kishanganga project was started in 2007 but on May 17, 2010, Pakistan moved for international arbitration against India under the provisions of the Indus Waters Treaty.