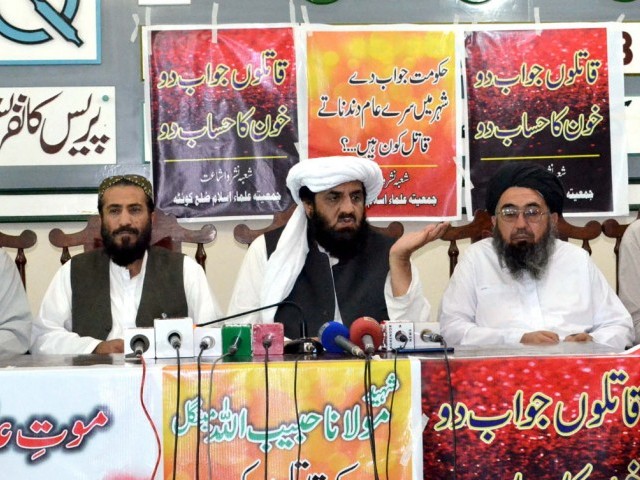 QUETTA: Jamiat Ulema-e-Islam-Fazl (JUI-F) amir Hafiz Hamdullah has slammed the provincial government over its failure in protecting the lives and properties of innocent citizens, announcing that the party will hold a protest on Friday against the recent target killing of Maulvi Habibullah Mengal.

Addressing a news conference flanked by other JUI-F members at the Quetta Press Club, former senator Hamdullah condemned the target killing of prayer leader Mengal in broad daylight.
Maulana Wali Muhammad Turabi, Haji Abdul Sadiq Noorzai, Zakir Shahwani and other leaders of MMA and JUI-F accompanied him.
Maulana Mengal, who was also a JUI-F senior leader, was shot dead by unidentified armed men on May 19 on Sariab Road.

“Despite spending billions of rupees on revamping the law and order situation in the province, innocent people are being targeted in busy streets of Quetta, which has created a sense of insecurity,” said Hamdullah.
“Maulvi Habib was a modest politician. He always preached peace to his followers. The target killers easily managed to escape after killing him in broad daylight which raises serious questions over the security of Quetta,” he said.
He announced a rally and protest against the murder of the JUI-F leader on Friday (May 25) after Friday prayers.
On the occasion, the JUI-F leaders said, “Unfortunately religious leaders are being targeted with foul language and bullets for preaching Islam and peace. The provincial government hasn’t taken any action or made progress in the murder investigation,” they added.