The new pair of satell­ites will pick up where the first missio­n left off, having comple­ted its 15-year missio­n in 2017
By AFP
Published: May 22, 2018
Tweet Email 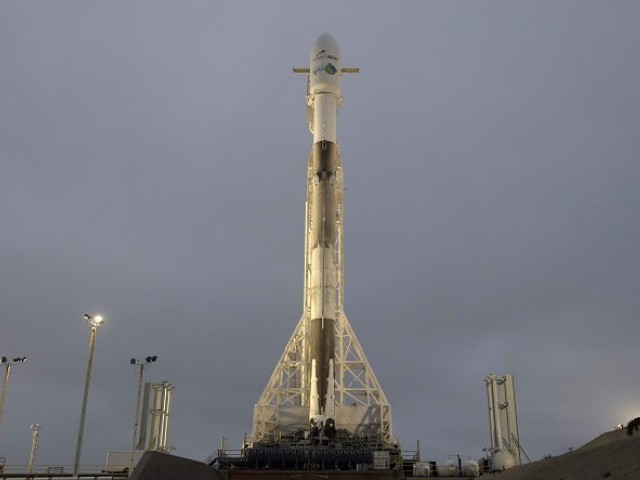 The SpaceX Falcon 9 rocket is seen with the NASA/German Research Centre for Geosciences GRACE Follow-On spacecraft and onboard, Monday, May 21, 2018, at Space Launch Complex 4E at Vandenberg Air Force Base in California. The mission will measure changes in how mass is redistributed within and among Earth's atmosphere, oceans, land and ice sheets, as well as within Earth itself. GRACE-FO is sharing its ride to orbit with five Iridium NEXT communications satellites as part of a commercial rideshare agreement. PHOTO: AFP

A pair of identical, sportscar-sized satellites are poised to zoom around the Earth and track changes in water and ice, offering new insights into global warming and sea level rise, NASA said Monday.

Groundwater, oceans, lakes, rivers and ice sheets will be monitored by the Gravity Recovery and Climate Experiment Follow-On (GRACE-FO), a joint mission between the US space agency and German Research Centre for Geosciences (GFZ).

The satellites are scheduled to blast off from Vandenberg Air Force Base in California on Tuesday at 12:47 pm Pacific time (1947 GMT).

A SpaceX Falcon 9 rocket will propel the satellites to an orbit about 310 miles (500 kilometers) above the Earth.

The pair will fly 137 miles (220 kilometers) apart, or about the distance from Los Angeles to San Diego.

NASA has spent $430 million on the mission, and Germany has spent about $91 million.

The new pair of satellites will pick up where the first GRACE mission left off, having completed its 15-year mission in 2017.

The first GRACE mission gave scientists a trove of data about the ever-dwindling ice mass in Antarctica and Greenland, and contributed data for thousands of scientific papers, NASA said.

“Water is critical to every aspect of life on Earth – for health, for agriculture, for maintaining our way of living,” said Michael Watkins, GRACE-FO science lead and director of NASA’s Jet Propulsion Laboratory in Pasadena, California.

“You can’t manage it well until you can measure it. GRACE-FO provides a unique way to measure water in many of its phases, allowing us to manage water resources more effectively.”