It was -25 degrees and we were still shooting: Ahad Raza Mir

It was -25 degrees and we were still shooting: Ahad Raza Mir

'Parwaa­z Hai Junoon’ star talks about the prepar­ations and hard work that went into filmin­g the air force film
By Mahwash Ajaz
Published: May 22, 2018
Tweet Email 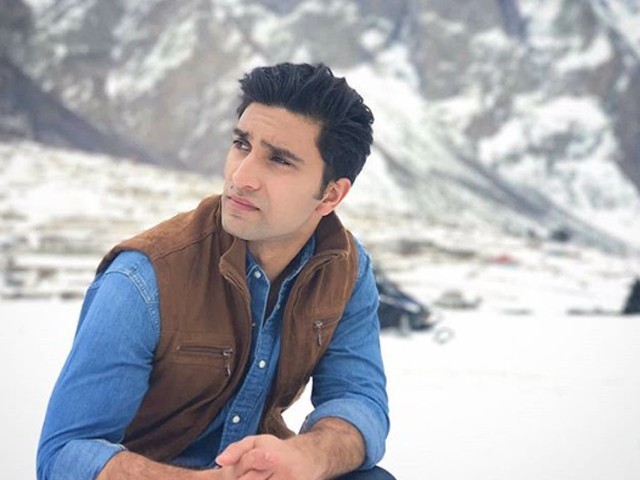 DUBAI: Ahad Raza Mir rose to fame post Yaqeen Ka Safar, wherein he played a young doctor with a tragic past. With his good looks and command over the small screen, the actor quickly garnered a whole lot of love and appreciation from fans and critics alike.

Needless to say, the world (at least, the female population of the world) cannot wait to see Ahad in the role of fighter pilot in the upcoming air force drama Parwaaz Hai Junoon. After all, he was the most Googled Pakistani personality throughout 2017, alongside cricketer Fakhar Zaman and Peshawar Zalmi’s Javed Afridi.

Parwaaz Hai Junoon is currently involved in some legal trouble, with the court putting a stay order on its release. Nonetheless, The Express Tribune caught up with Ahad to find out more about his forthcoming film and all the preparation and hard work that went into it.

The Express Tribune (ET): ‘Parwaaz Hai Junoon’ has been in the works for a long time. What has the wait like been for you?

Ahad Raza Mir (ARM): Not going to lie…it has been excruciating! With a film this big, which has so many things going on – like the air force is involved; the expectations and the wait are all very high.

Obviously, it took longer than it was anticipated, which is okay. But you can see that the excitement is still there. I’ve seen bits of Parwaaz Hai Junoon and I’m quite excited. I hope that people enjoy it. All those who have waited for it, who are excited to see it now that some of the teaser trailers have been released – I hope they enjoy it. That’s my biggest hope. That they believe that all the wait was worth it.

ET: You play an air force cadet in the film. How did you prepare for the role?

ARM: First, I sat and watched Top Gun and many other air force movies. I could have watched Alpha Bravo Charlie too. There are so many great references that can be used to prep for a role like this.

However, when I found out that we were going to shoot in actual Pakistan Air Force (PAF) locations, I thought, what better way to get into character than to go and speak to real cadets? I feel like the training and preparation was kind of happening as the shoot was going on too. We got to interact with the cadets, see their lives, how they are and the do’s and don’ts of being in the academy. We got sort of an insider scoop which lent a guiding hand to all of us for our characters. It was a great help in terms of preparing.

ET: How did you find shooting in minus temperature? What were the toughest parts of it?

ARM: Without revealing much, I’ll tell you that there was a ‘cold scene.’ The other guys and I – our feet were freezing. We decided to put some rocks into a fire that we had going on and let the stones get hot and then put them in our shoes. That’s how we’d dry our feet and keep them warm!

The toughest part of the shoot was definitely how we shot in some very extreme temperatures and situations. And we had to deal with it. We were in Altar and it was -25 but we were still shooting. And the tough part or the struggle didn’t stop when the scenes stopped: it was still there. What I hope now is that the entire struggle shows onscreen.

ET: Are you still being referred to as actor Asif Raza Mir’s son by people? Do you make a conscious choice to disconnect with that?

ARM: I’m very well connected with my family. My dad, my brother, my mother – we’re all very tightly knit. We’re not together all of the time but that doesn’t change anything. I think being labelled as Asif Raza’s Mir’s son was quite prominent in the beginning of my career but it’s a label which I wear with pride, to be honest. Regardless of me creating a name for myself, I am still my father’s son and am very proud of that.

But I’ve established myself, my own recognition and reputation. And that’s a wonderful thing. I think more people know me as me and then realise, “Oh, you’re Asif Saab’s son!” That’s kind of interesting. It has all kept me very grounded, at the end of the day. Another important thing here is that I grew up with a father who was an ‘actor’ and ‘celebrity.’ I saw him being himself all the time. The man that my father is in public is the same guy he’s at home. That’s kind of subconsciously ingrained in my system. It’s kind of what makes me, me.

ET: What has the journey been like, from ‘Yaqeen ka Safar’ to now?

ARM: It’s been full throttle, that’s for sure! Now, at this point of my life, it has settled down a bit which is great. This gives me time to evaluate the year. In the beginning of 2017, the guy who came from Canada in 2016, I wouldn’t have thought this would ever have happened. I’m honoured and lucky. The legacy that my family has is still very much there and that’s a highlight for me.

As for Parwaaz Hai Junoon and Yaqeen Ka Safar, they were shot around the same time and I was going back and forth between characters and shoots and it was a lot of work. So this down time right now is incredible.