On the up: Woman dies of gastro in Rahim Yar Khan

On the up: Woman dies of gastro in Rahim Yar Khan 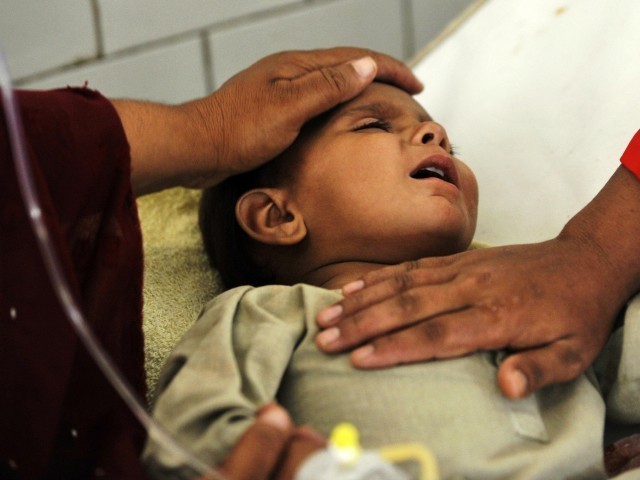 RAHIM YAR KHAN: A woman died of gastro while several others remain hospitalised due to dysentery and vomiting in Rahim Yar Khan on Sunday.

The gastroenteritis epidemic is spreading like wildfire as 39 patients have been admitted to various health facilities of the city so far. Those currently being treated also include a large number of children.

Officials told Express News that 45-year old Ghulam Bibi, a resident of Garhi Ikhtiar Khan, was admitted to Sheikh Zayed Hospital after being infected by gastro. However, Bibi succumbed to the infection just hours after his admission to the hospital despite all efforts to save her.

The patients were undergoing treatment in various hospitals and health facilities in the city.

Earlier, the health department’s official record revealed that at least 193,117 acute diarrhea patients (viral gastroenteritis) were admitted to government-run hospitals in Faisalabad, Lahore, Multan and other cities from January 1 to  May 11, 2017.

The highest number of patients suffering from the disease was reported in Lahore followed by Dera Ghazi Khan, Sheikhupura, Multan, Bahawalpur and Faisalabad.

Medical experts were of the view that the consumption of unhygienic food, drinks and contaminated water are major causes of such infectious diseases.

Under sales tax: Outstanding funds to be reimbursed