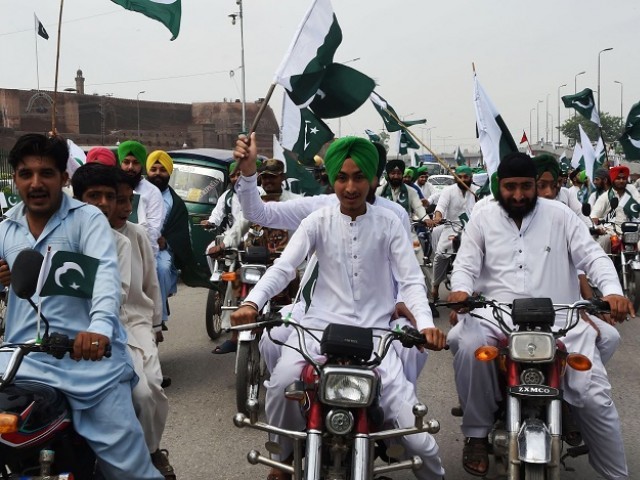 Pakistani Sikhs hold nationals flags as they march during the celebration to mark the country's Independence Day in Peshawar on August 14, 2017. PHOTO: AFP

LAHORE: Pakistan’s Sikh community, while thwarting an Indian intelligence agency’s conspiracy against Pakistan, rejected accusations that Sikhs are forced to bury their loved ones due to non-availability of crematoriums in the country.

Head of Delhi Gurdwara Committee Manjeet Singh had alleged that no crematorium existed in Peshawar, and the community was forced to bury their loved ones in violation of traditional Sikh rituals.

Similarly, cremation grounds are present in Buner, Mardan, Swat, Barra, Aurakzai Agency, Kurram Agency and other tribal areas despite the community’s migration to other areas.

According to the Evacuee Trust Property Board (ETPB) officials, 50 cremation grounds were present in Sindh, two in Lahore, one in Nankana Sahib, one has been built in Panja Sahib where the Hindus cremate their deceased.

Local Sikh leaders said there were some scheduled caste Hindu families settled in Peshawar, who had later adopted the Sikh religion, and it is quite possible that they continued old tradition of burying their loved ones.

Singh has advised the leader of Delhi Gurdwara Committee that instead of chalking propaganda against Pakistan, he should take action against Narayan Das, a blaspheme, involved in disgracing the Guru Arjan Devji and Guru Granth Sahib.

The Indian government should be requested to hang Narayan Das under Article 92 of the Indian constitution, he added.

On May 16, the Sikh community in the province had urged the court to direct the government to build a crematorium in the provincial capital.

Sikh community elder Babaji Guru Gurpal Singh, through senior lawyer Muhammad Khurshid, submitted a writ petition in the Peshawar High Court (PHC) that the provincial government had in the fiscal budget for 2017-18 allocated Rs30 million to build a crematorium for the Sikh community and a graveyard for the Christian community in Peshawar.

Talking about the importance of the project, he stated that as many as 60,000 Sikhs live in Khyber-Pakhtunkhwa (K-P), including 15,000 who live in Peshawar alone. Despite that, there is no crematorium where Sikh mourners can carry out the last rites of their loved ones.