Sabika Sheikh was studyi­ng in the US throug­h an exchan­ge progra­mme funded by the State Depart­ment
By News Desk / AFP
Published: May 18, 2018
Tweet Email 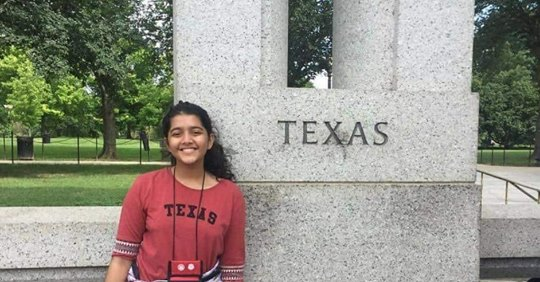 Sabika Sheikh was studying in the US through an exchange programme funded by the State Department. PHOTO: TWITTER

CHICAGO: Sabika Sheikh, a Pakistani exchange student was among the ten killed in the school shooting which occurred in Santa Fe, Texas on Friday.

Sheikh was studying in the US through an exchange program facilitated by the Kennedy-Lugar Youth Exchange and Study (YES) programme.

With less than a month until going home to her friends and family, Sabika Sheikh, a YES exchange student from Pakistan, was killed in the #SantaFeHighSchool shooting. If this had happened to me when I was on YES in Jordan it would be "terrorism"-why is it different when it's here pic.twitter.com/CeozGAVSRN

In a letter sent to the YES programme students by Megan Lysaght, the program manager at American Councils for International Education, wrote: “It is with the greatest sadness in my heart that one of our YES students, Sabika Sheikh of Pakistan, was killed today in the school shooting in Santa Fe, Texas.

“Please know that the YES program is devastated by this loss and we will remember Sabika and her families in our thoughts and prayers. We will have a moment of silence in her memory today.”

Pakistan’s Embassy in Washington DC, confirmed through Twitter that Sheikh was among the high school students killed. Pakistani ambassador to the US, Aizaz Chaudhry expressed his heartfelt condolences for the victims of the tragic incident.

Among the victims was Sabika Sheikh, a Pakistani exchange student. “Our thoughts and prayers are with Sabika’s family and friends”. Ambassador Chaudhry 2/3

Ten people, mostly students, were killed when a 17-year-old classmate armed with a shotgun and a revolver opened fire in a Texas high school on Friday, in the latest deadly school shooting to hit the United States.

The gunman, who was arrested on murder charges, was identified as Dimitrios Pagourtzis, a 17-year-old junior at Santa Fe High School in Santa Fe, Texas.

Governor Greg Abbott said 10 people died and another 10 were wounded in what he called “one of the most heinous attacks that we’ve ever seen in the history of Texas schools.”

“Nothing can prepare a parent for the loss of a child,” Abbott told reporters in Santa Fe, located some 50 kilometres southeast of Houston.

Abbott said the gunman apparently carried out the attack with a shotgun and a .38 revolver that were legally owned by his father.

The Houston Chronicle said Pagourtzis also threw pipe bombs into a classroom at the start of the school day.

The governor said searches were being conducted at two residences and “explosive devices” had been found including a “CO2 device” and a Molotov cocktail.

He said journal entries by the gunman suggested he wanted to commit suicide but “he gave himself up.”

Abbott said there were no “warning signs” about the suspect ahead of time although he did post a picture on his Facebook page of a T-shirt with the words “Born to Kill” on it.

We grieve for the terrible loss of life, and send our support and love to everyone affected by this horrible attack in Texas. To the students, families, teachers and personnel at Santa Fe High School – we are with you in this tragic hour, and we will be with you forever… pic.twitter.com/LtJ0D29Hsv

“As far as having a criminal history, he has none,” Abbott said. “His slate is pretty clean. And so there simply were not the same type of warning signs that we’ve seen in so many other shootings.”

One may have “certain information,” he said, and the other had some “suspicious reactions.”

Harris County Sheriff Ed Gonzalez said the “majority” of the victims were students. “Officers inside encountered a bloody mess in the school,” a law enforcement official told the Houston Chronicle.
Area hospitals said two victims were in critical condition.
One of the wounded was a police officer, John Barnes, who engaged the gunman and was shot in the elbow, officials said.

The shooting was the latest in what has become an all-too-familiar situation in American schools, where gun violence has become a part of everyday life.

Santa Fe High, you didn’t deserve this. You deserve peace all your lives, not just after a tombstone saying that is put over you. You deserve more than Thoughts and Prayers, and after supporting us by walking out we will be there to support you by raising up your voices.

“I shouldn’t be going through this,” Shrader said as her mother comforted her.

“It’s my school. This is my daily life. I feel scared to even go back.”
Shrader said fire alarms went off “and everybody just started running outside.

“And the next thing you know everybody looks and you hear ‘boom, boom, boom’ and I just ran as fast as I could to the nearest forest so I could hide and I called my Mom.”

Earlier this year, 17 people were killed at a Florida high school — a massacre that prompted survivors to launch a grassroots campaign against gun violence.

It was the second mass shooting in Texas in six months.  Twenty-six people were killed in a Texas church in November 2017 by a 26-year-old Air Force veteran.

Abbott, the Texas governor, said he would convene roundtable discussions to look into ways to prevent such mass shootings in the future.

President Donald Trump expressed “sadness and heartbreak” over the shooting and ordered US flags to fly at half-staff for the next few days. “This has been going on too long in our country,” Trump said, speaking at an event on prison reform at the White House.

“We’re with you in this tragic hour.”

Trump, who has previously shied away from gun control and proposed arming teachers, said he was “determined to do everything in our power to protect our students, secure our schools, and to keep weapons out of the hands of those who pose a threat to themselves, and to others.”

Every day that we fail to act on gun violence, we are failing our children. This should be a day for soul searching across America – and that soul searching should be matched with legislating to begin dealing with this national shame.

The shooting erupted before 8:00 am, as the first classes of the day were starting.

“It was pretty quiet for a few seconds, and then we just hear someone like shoot a gun, and just like a ‘pow-pow-pow,'” student Hunter Mead, 14, told AFP.

“We are fighting for you,” tweeted David Hogg, a Stoneman Douglas student who has emerged as a leader of the gun control campaign.

“We cannot let this continue to be the norm,” tweeted Delaney Tarr, another Stoneman Douglas student. “We cannot.”

Former Democratic presidential candidate Hillary Clinton urged lawmakers to take action. “Every day that we fail to act on gun violence, we are failing our children,” Clinton said on Twitter.

US Ambassador to Pakistan also offered his condolences to the family.

This morning, I called the family of Sabika Sheikh and offered my deepest condolences. All of us at the U.S. Mission in Pakistan are devastated by and mourn her loss. We will honor her memory. #AmbHale #USEmbassyISB pic.twitter.com/Q8ZhF27gGz