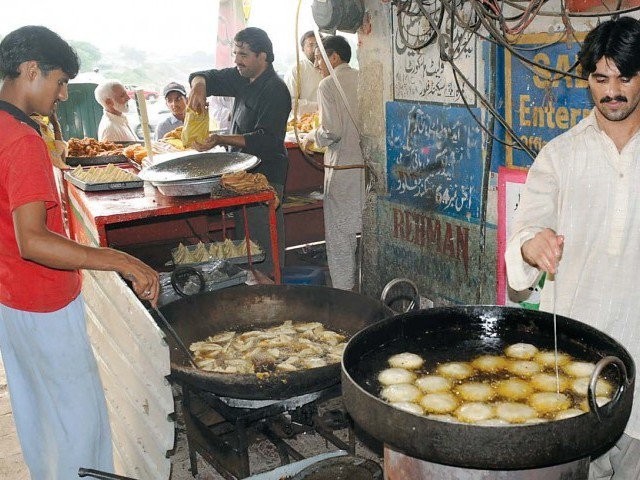 With the beginning of Ramazan, sunsets have becomes quite a festive occasion for the residents of the city, as a massive shopping spree is witnessed immediately before people break their fast.

Karachi continues to face the twin problem of load-shedding and water shortage which has forced families to buy items for their iftar meal from markets, rather than making them at home.

Makeshift stalls, selling delicious pakoras, fiery hot samosas and delicious fruits of all type have sprung up in street corners. These stalls provide a lucrative employment opportunity for the jobless youth.

According to one such vendor, Hashim Ahmed, the month of Ramazan provides an opportunity for food sellers of all kinds to make a profit.

“All kinds of people buy food for iftar according to their budget. The shopping starts around four in the evening and continues till the call for prayers before sunset. There are more than 8,000 food stalls in the city selling these items,” Ahmed told The Express Tribune.

Thousands of people from various areas of Sindh and Punjab head to the mega-city for Ramazan, and work in 12-hour shifts to prepare food items for their business.

Food is made for small families, mosques and religious seminaries. According to some reports, big philanthropists are especially inclined to make deals with these food vendors for the whole month in advance, as they prepare food for the poor and the hungry.

“After the first ten days, most shopping centres in the city remain open long into the night, and after breaking their fast, people do like to shop in preparation for Eid. This also adds to the volume of our work,” Ahmed said.

A variety of different items like pakoras, samosas, dahi ballay etc are sold by these food vendors during the month of Ramazan. Women usually help the men prepare the items before they are bought and sold at the stalls.

Pakoras are prepared with gram flour, and potatoes, onions, spices, chicken and fish are all used to make them. Reports suggested that the price of pakoras are increased by 50 per cent this season.

Different kinds of rolls and samosas are also a much sought-after item in the month of Ramazan. Dough is prepared with superfine flour, oil and other hot spices are mixed in it. It is then cut in length and round shapes. The strips are used for making delicious samosas and rolls which are sold to eager buyers.