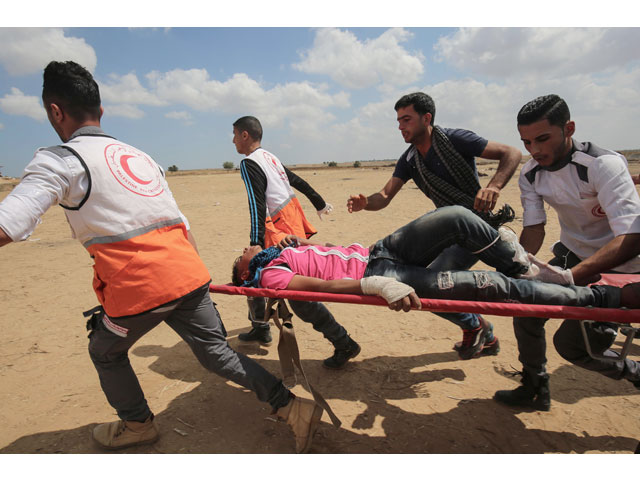 Palestinians carry a protester injured during clashes with Israeli forces along the border with the Gaza strip east of Khan Yunis on May 14, 2018, as Palestinians protest over the inauguration of the US embassy following its controversial move to Jerusalem. PHOTO: AFP

Speakers at a seminar in Islamabad have unanimously condemned Israel’s violence against Palestinian protesters in the wake of US relocation of its embassy from Tel Aviv to Al-Quds Al-Sharif.

The condemnation came at a seminar titled ‘Kashmir and Palestine: seventy years of UN resolutions for self-determination’ organised by the Pakistan Institute of Parliamentary Services.

The speakers condemned and opposed US move of shifting its embassy to Al-Quds Al-Sharif. They said the people of Pakistan stand in solidarity with the Palestinian people in this hour of grief.

Comparing the situation in Palestine and Occupied Kashmir, the speakers called upon the United Nations to implement its resolutions on these long-standing disputes.

In his address on the occasion, Azad Jammu and Kashmir Prime Minister called for new initiatives on part of government of Pakistan to solve the Kashmir issue.

Senator Mushahid Husain Syed in his address said no civilized country supports Indian and Israeli occupation and atrocities in Kashmir and Palestine.

Senator Abdul Qayyum reiterated Pakistan`s unwavering support to the cause of Kashmiri and Palestinian people.

Palestinian Ambassador Walid Abu Ali said: “We need support from friendly countries and we have firm belief that the land of Palestine is a gift from Allah Almighty and we will never give up our struggle.”