Kerry says he does not know when the probes might produc­e result­s.
By Reuters
Published: May 18, 2011
Tweet Email 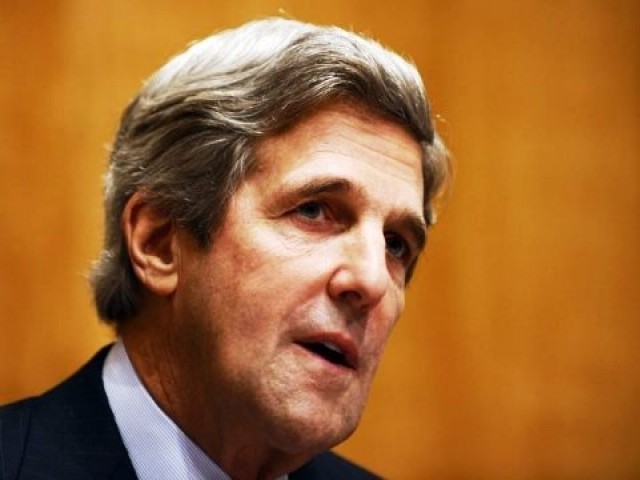 Kerry says he does not know when the probes might produce results. PHOTO: AFP/FILE

WASHINGTON: Pakistan has launched four separate probes into Osama bin Laden’s life and death on Pakistani soil, US Senator John Kerry said on Tuesday, adding that Pakistan’s intelligence chief has promised to tell him if it turns out someone in his agency knew Bin Laden was there.

Pakistan, in what some US officials said was a gesture to show it cared about helping the United States fight militants, arrested what it claimed was a “senior” al Qaeda operative.

But US officials were skeptical. Kerry, just back from a trip to Pakistan, said there were four Pakistani investigations into the circumstances of the death of Bin Laden, who was living in a compound in the garrison town of Abbottabad before US forces killed him on May 2.

Kerry did not know when the probes might produce results, and noted that the United States was also sifting through evidence that could indicate whether Pakistan knew of Bin Laden’s whereabouts before his death.

“I do know this, that the head of Pakistani intelligence told me that if someone at their lower level knew it, they will find out,” Kerry told reporters outside the Senate.

Washington’s fragile ties with ally Islamabad took a beating after US special forces flew in on a secret operation and killed Bin Laden, nearly 10 years after he orchestrated the Sept 11 attacks on the United States.

Irate US lawmakers wary of Pakistan’s promises of cooperation against militants in the region have threatened to cut off US aid to the country. Kerry is close to the Obama administration and has gone to Pakistan before to try and tamp down crises in relations with Washington.

Secretary of State Hillary Clinton said Tuesday she had been in constant contact with Kerry during his trip. Clinton said she had also spoken in recent days with Pakistan’s top leaders, including President Asif Ali Zardari and army chief General Ashfaq Kayani, and talks would continue when US special envoy Marc Grossman visits Islamabad soon.

Deputy CIA director Mike Morell is also going on that trip, which is expected to prepare for a visit by Clinton.

Pakistan’s probes are being conducted by its army and intelligence agency and a civilian commission is being put together by parliament, a Senate aide told Reuters, speaking on condition of anonymity.

He said the fourth probe by the Pakistani air force is looking into how US helicopters managed to fly to Bin Laden’s compound only 30 miles (50 km) from the Pakistani capital. During his time in Pakistan, Kerry spent over four hours meeting army chief Kayani and Pakistani intelligence chief Lieutenant-General Ahmad Shuja Pasha, the Senate aide said.

Kerry told his committee Tuesday he hoped the United States and Pakistan could strengthen their relationship, adding that “they (Pakistan) rely on assistance in order to be able to wage this fight against extremism.”

“I think there is great ability here to actually shift the dynamics of the entire relationship between Afghanistan-Pakistan, Pakistan-the United States, and all three and India, and ultimately change the longer-term strategic interests of the region,” he said.

“But that will depend on quiet and effective diplomacy over the course of these next weeks,” Kerry said.

US officials played down the significance of a claim from Pakistani authorities about the arrest of a purported “senior” al Qaeda operative.

Reports from the region said Pakistan claims Yaqub had been in contact with al Qaeda leaders on the Afghanistan/Pakistan border. Two US officials said American government agencies were looking into the Pakistani Army’s assertions, but that Yaqub was regarded at most as a mid-level figure in al Qaeda’s hierarchy. He is “not top tier,” one of the officials said.