Over 88 killed in twin gun-and-bomb attacks

Over 88 killed in twin gun-and-bomb attacks

At least 88 people were killed and over 200 injure­d as terror­ists attack­ed Friday.
By Rana Tanveer / Abdul Manan
Published: May 29, 2010
Tweet Email 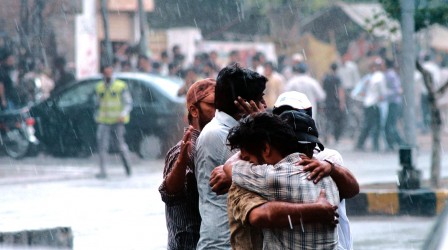 At least 88 people were killed and over 200 injured as terrorists attacked Friday congregations of the Ahmadis in twin assaults in Lahore, rescue officials said.

Two terrorists armed with AK-47 rifles and hand grenades stormed the Baitul Noor ibbatdatgah of the Ahmadiyya community in Model Town, killing at least 19 people and injuring about 75, eyewitnesses and officials told The Express Tribune.

Simultaneously, another 69 were killed and 125 injured as three gunmen wearing suicide vests ambushed security guards at the main gate of their place of worship, the Darul Zikr on Allama Iqbal Road in the Garhi Shahu area of Lahore.

Eyewitness Rizvan Ahmed said the terrorists entered the main hall during the Friday sermon and began firing indiscriminately at the worshippers, lobbing hand grenades at the panicked crowd. “One of the attackers blew himself up near Munir Ahmed Sheikh, head of the Lahore Jamaat Ahmadiyya (JA), killing him and many others. The second attacker who had been firing from a minaret detonated himself inside the hall, he added. The attackers then took the worshippers hostage.

JA management official Munnawer Shahid told The Express Tribune that at 11 am that day, a bearded man had asked about who would be delivering the Friday sermon. Upon being told about Sheikh, the man asked to meet him. “I refused and he said we’d meet again at 1:30 pm… Exactly at 1:30 that afternoon, we were attacked,” said Shahid.

According to Baitul Noor security in-charge Waseem Ahmad Butt, around 2,200 people had gathered to offer prayers at the time the attackers first fired at the main gate, killing the security guard. Butt says Ahmadiyya community murrabi (circle spiritual leader) Lt General (retd) Ch Nasir Ahmad was among the targets and he died on the spot.

Two of the attackers who were armed with suicide jackets, automatic weapons and leather sheets entered the main building then and began firing at the window panes before lobbing a grenade into the main hall, added Butt.

Police arrived about 25 minutes after a worshipper called for help, reported Express 24/7. DG Rescue 1122 and awaiting ambulances were allowed in once the police arrived.

The police used Armoured Personnel Carrier (APC) vehicles to rescue the hostages and to bring out the injured and the dead. Qamar Sultan Ahmed, one of the hostages, told The Express Tribune that the terrorists must have had a map of the building as they went straight from the entrance to the main hall and opened fire.

While no one has claimed responsibility for the attacks as yet, Lahore Commissioner Khusro Pervez said that Indian involvement, possibly of intel agency RAW, cannot be ruled out as yet.

Pervez also admitted the attacks were the result of “a security lapse” and that an investigation would be carried out on the reasons behind the inadequate security.

Ahmadiyya community spokesman Saleemuddin told The Express Tribune that over 75 of their members were killed and that the “government has failed to provide them security and protect their lives and property in the country”, adding that the Ahmadis had already informed the law security agencies about the terrorists’ threat but was not taken seriously.