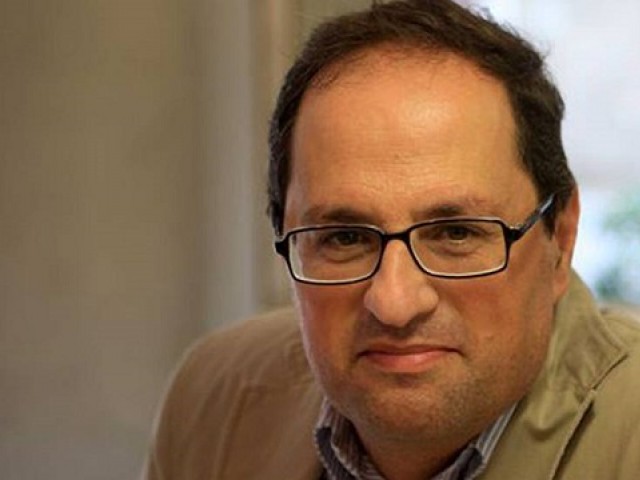 BARCELONA: The Catalan parliament is expected to elect fiercely pro-independence candidate Quim Torra to be its regional president later Monday as separatists seek to end the emergency direct rule imposed by Madrid last year and renew their secession bid.

Torra’s elevation became all but assured after the far-left radical pro-independence CUP party said it would abstain from an investiture vote in the regional parliament on Monday.

“The CUP will not block the formation of a new government,” the party said.

The absence of its votes will leave father of three Torra with the simple majority needed to be elected regional president.

Puigdemont rejects being chosen as next Catalan leader

Analysts warned the road ahead would be a rocky one, however, with politicians and voters split on the merits of trying to leave Spain.

The formation of a new regional government is required for Spain to lift the state of direct rule.

The Catalan regional assembly had failed to elect Torra in an initial vote requiring an absolute majority on Saturday.

In the second round vote scheduled for Monday, only a simple majority will be required so Torra is expected to win the vote.
He was handpicked as a candidate by deposed leader Carles Puigdemont.

Puigdemont is in exile in Germany and faces jail on rebellion charges for last year’s secession bid if he returns to Spain.

In an interview Saturday with Italian daily La Stampa, Puigdemont said Torra, as his designated successor, “takes power in provisional conditions and he is aware of that. From October 27, he will be able to call new elections.”

Torra, 55, gave a combative speech during Saturday’s debate.
He told parliament he was “working tirelessly for the Catalan republic”.

He signalled that the secession crisis is far from over, even if Catalonia does finally get a government.

That prompted Madrid to impose direct rule and led to months of political limbo.

Torra lambasted European institutions for their “unacceptable silence” over the Catalan crisis. He said he was ready to talk “without conditions” with the government of Spanish Prime Minister Mariano Rajoy.

Rajoy’s government and the Spanish courts have declared secession illegal and vowed to block it.

Rajoy said that constitutional direct rule “could be used again if necessary”, if the next regional leadership did not respect the law.
Catalonia is Spain’s richest and most populous region, with 7.5 million people.

It has its own distinct language and cultural traditions. Calls have increased in recent years for it to have more control over its finances, with some demanding outright independence.

Separatist parties won regional elections in December. But every leadership candidate picked by the separatist camp since has fallen flat.

Torra faces divisions within the separatist camp, composed of the CUP, the leftwing ERC party and Puigdemont’s Together for Catalonia grouping, according to Antonio Barroso, deputy research director at Teneo Intelligence.

Barroso said the ERC wants a moderate approach to avoid a Madrid clampdown and to play a longer independence game.

“In contrast, Puigdemont’s strategy is to continue using every opportunity… to continue challenging the Spanish authorities and keep the secessionist momentum alive.”

For Oriol Bartomeus, political analyst at Barcelona Autonomous University, what is in sight is “a divided government – there could be fallout”.

Ines Arrimadas, leader of the centrist, unionist Ciudadanos party, told Torra on Saturday: “I don’t know if you will be president of the regional government, but you will never be the one of all Catalans.”