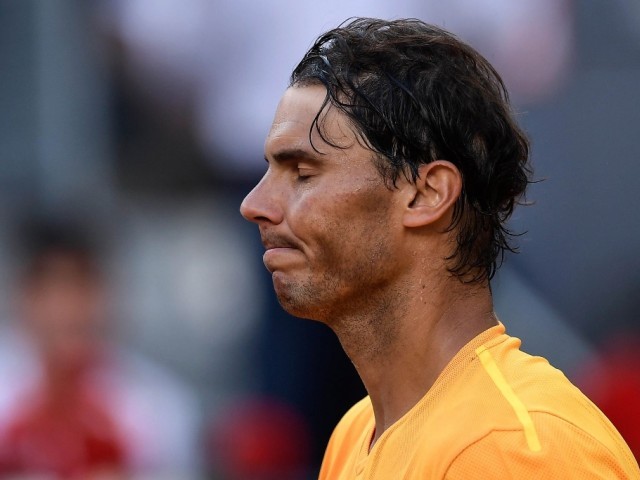 At his own game: Thiem joins Novak Djokovic and Gaston Gaudio as just the third man to have beaten Nadal three times on clay. PHOTO: AFP

MADRID: Rafael Nadal suffered his first clay-court defeat in almost a year when the world number one was shocked 7-5, 6-3 by Austria’s Dominic Thiem in the Madrid Masters quarter-finals on Friday.

Defending champion Nadal, who came into the tournament having won both the Monte Carlo and Barcelona for an 11th time, also saw his record 50-set winning streak on clay ended by the fifth-seeded Thiem.

Thiem, the runner-up to the great Spaniard in the 2017 Madrid final, had been the last player to defeat Nadal on clay at the 2017 Italian Open in Rome — 357 days ago.

The shock result also means that Roger Federer will reclaim the world number one ranking on Monday.

“A player like Dominic has a lot of potential. Whenever he plays really well, it’s very difficult to stop him,” admitted Nadal. “He played well and I didn’t play well. We’re not playing a game where the differences are big or massive. The differences are very small.”

Five-time Madrid winner Nadal, who will be bidding for an 11th French Open title in Paris later this month, had won his previous 21 matches on clay.

That run included him surpassing John McEnroe’s 1984 record of 49 sets won in succession on the same surface during his last-16 duel with Diego Schwartzman on Thursday.

However, in their ninth career clash, Thiem put Nadal under pressure almost from the start on Friday and broke for a 4-3 lead in the first set.

A double fault and a long forehand allowed Nadal to retrieve the break at 5-5.

It was a brief reprieve as a lazy forehand volley gave Thiem a 6-5 advantage and the set came the Austrian’s way in the 12th game off an ace.

Thiem, watched by his girlfriend — and WTA star — Kristina Mladenovic, turned the screw for a 3-1 lead in the second set but Nadal battled back to 3-3.

That was as good as it got for the Spaniard as Thiem broke again for 4-3, held to love for 5-3 and secured victory with another blistering forehand.

Thiem, who next faces South Africa’s Kevin Anderson for a place in Sunday’s final, joins Novak Djokovic and Gaston Gaudio as just the third man to have beaten Nadal three times on clay.