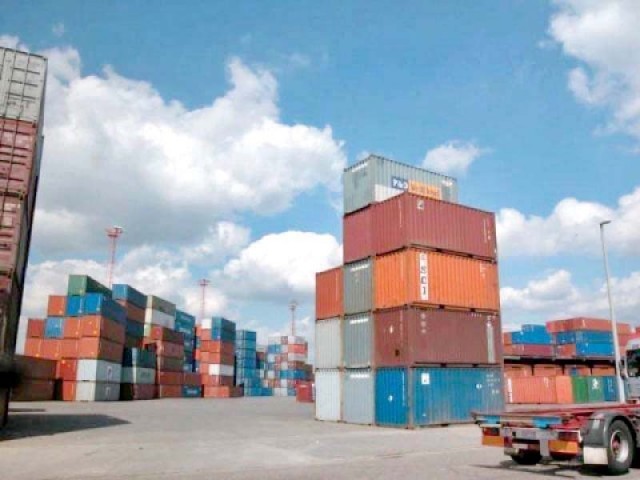 The over 10% devaluation of the rupee against the US dollar is also expected to give a major boost to exports in the coming months. PHOTO: FILE

ISLAMABAD: Pakistan’s trade deficit is now near $30 billion in just ten months, which is higher than even revised estimates despite solid growth in exports for the second month in a row.

Pakistan exported goods worth $2.13 billion in April, a year-on-year increase of 18.7%, according to the Ministry of Commerce. The growth in exports came on the back of tax incentives and rupee devaluation.

“Pakistan is now 8th in the world in terms of export growth, coming up from 158 in 2016-17,” said Commerce Secretary Younus Dagha while hoping that the growth momentum will continue in the remainder two months of the fiscal year.

But the increase in exports was outpaced by soaring imports.

The trade deficit still widened 14.3% year-on-year to $29.8 billion in the cumulative ten-month period (July-April), surpassing the revised estimated deficit for the entire fiscal year. Against the original trade deficit estimate of $25.7 billion, the Ministry of Finance had estimated that the deficit could swell to $29.4 billion for fiscal year 2017-18 due to higher imports.

The higher-than-officially-projected trade deficit in just ten months will have adverse implications for both the current account deficit and foreign currency reserves.

Foreign currency reserves are already hovering in the trajectory of $11 billion despite commercial loans from China.

Exports in July-April were up by 13.7% to $19.2 billion, equal to 84% of the annual export target of $23.1 billion. This suggests that the government may at last achieve its annual export target during its last year in power. In absolute terms, export receipts were up by $2.3 billion during the first ten months. The Ministry of Commerce credited the Prime Minister’s export package for strong growth in exports. The PM’s incentive package is going to end in June this year and so far, authorities have not taken a decision whether to extend it. The textile sector is in favour of further extending the package aimed at consolidating the gains.

The over 10% devaluation of the rupee against the US dollar is also expected to give a major boost to exports in the coming months.

However, the problematic area remained the imports, which is also overshadowing strong growth in exports. The value of imports stood at $49.5 billon, which was 14.1% or $6.1 billion higher than the import bill booked during the first ten months of the last fiscal year. The ten-month import bill exceeded the government’s original estimates of $48.8 billion imports in this fiscal year. Now, it has revised the estimates to $54.2 billion for the outgoing fiscal year.

Export receipts are still 257% less than the import bill in the first ten months. The higher trade deficit is on an already higher base, as Pakistan had closed the last fiscal year at a record $32.4-billion deficit.

Pakistan is expected to book a current account deficit of around $16 billion during the current fiscal year 2017-18 – against the government’s target of $9 billion.

Foreign remittances are still growing despite apprehensions of a slowdown due to economic and social conditions in the Gulf countries. This will partially offset the impact of growing trade deficit on the external account. During the first ten months, foreign remittances amounted to $16.3 billion, registering almost 4% growth.

On a year-on-year basis, Pakistan’s exports grew to $2.13 billion in April over the same month of the previous fiscal year, according to the Ministry of Commerce. Exports were higher by 18.7% or $335 million over the receipts of April 2017.

Imports grew by only 3% and the country booked $5.1 billion import bill in April. The import bill was $147.5 million more than that of April 2017. The ministry stated that imports are now finding their real value by improved exchange rate regime and regulatory duties on non-essential and luxury goods. However, imports remained under pressure due to continuation of oil prices on the higher side, it added.

The trade deficit during stood close to $3 billion in April 2018, said the commerce ministry. The $3-billion trade deficit was 6% or $187 million less than the previous year.

Agriculture gets hefty subsidies in Sindh budget for FY19