Judge Bashir has writte­n a letter to the apex court reques­ting an extens­ion for the trial
By Rizwan Shehzad
Published: May 8, 2018
Tweet Email 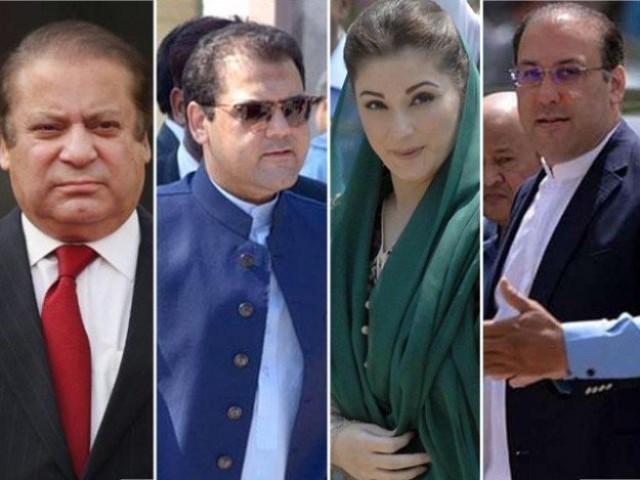 ISLAMABAD: An accountability court on Tuesday sought more time from the Supreme Court to conduct trial in the references filed by the National Accountability Bureau (NAB) against members of the Sharif family.

Accountability court judge Muhammad Bashir, who presides over the hearings, has written a letter to the top court requesting for a second extension in the trial.

Meanwhile, the court has summoned head of the Joint Investigation Team (JIT) Wajid Zia to record his statement in the Al-Azizia & Hill Metal Establishment reference.

The NAB had filed three references against the Sharif family in wake of the Panama Papers scandal.

In March, the Supreme Court had granted a two-month extension to the accountability court to wrap up the proceedings.

The three-judge bench headed by Justice Ejaz Afzal Khan and comprising Justice Azmat Saeed Sheikh and Justice Ijazul Ahsan took up the pleas and granted extension in the earlier six-month deadline for concluding the NAB references against the Sharif family.

However, as the two-month deadline expires, the court has yet to record the statements of three more witnesses whom the defence counsel would then cross examine

Subsequently, the accused standing trial would record their statements and then the prosecution and defence would present arguments and give rebuttal.

Meanwhile, the accused can also bring witnesses in their defence once they record the statements. Once the remaining three witnesses record their statements, defence counsel concludes cross examination, prosecution and defence finish presenting arguments and rebuttals, the court would reserve the judgment in the references.

Judge Bashir remarked that the matter of recording the statement of the accused before or after the prosecution witnesses would be decided after the Supreme Court responds to the request.

He, however, directed Zia to appear before court for recording his statement on May 10.

During the proceeding, Sharif’s counsel Khawaja Haris said the apex court should consider granting a three-month extension to which the judge replied that the Supreme Court will decide the time limit.

Maryam Nawaz’s counsel, Amjad Parvez, said that in order to conduct transparent trials, the defence has to be given equal amount of time to prepare as the prosecution.

“They [prosecution] took a time of eight months for 18 witnesses,” Parvez said.

During Tuesday’s hearing, Judge Bashir remarked that the decision on all three references would be announced together. The three references hold the entire Sharif family, including son-in-law Capt (retd) Safdar as accused in the case.

Last year, the Supreme Court disqualified prime minister Nawaz Sharif from holding public office over failure to disclose his ‘un-withdrawn receivables, constituting assets’ in his nomination papers filed ahead of the 2013 general elections.

Interestingly, his disqualification was not made on the basis of corruption charges levelled by the PTI and others after the emergence of the Panama Papers.

The 11.5 million documents from the Panamanian law firm, Mossack Fonseca, exposed how affluent all over the world used shell companies and offshore tax havens to hide their wealth.

The disqualification was made on the basis of documents collected by the Joint Investigation Team, which was probing the Sharif family.
The documents showed that the former prime minister had been an employee of a Dubai-based firm, Capital FZE, and as chairman of its board on a salary.

However, during the trial, JIT Head Wajid Zia admitted in a startling revelation that the team did not collect any document to establish if the deposed prime minister had received salary from the Capital FZE Company.

The documents obtained from a law firm and stamped by the Jebel Ali Free Zone Authority (JAFZA) apparently pertain to former prime minister’s employment contract, payment certificate, personal details, him being the chairman of the board at Capital FZE from July 8, 2006, to July 7, 2008, but they do not state that Sharif actually received salary from the company.