US Presid­ent Donald Trump and his Middle East allies argue that the nuclea­r agreem­ent is weak and needs to be replac­ed
By AFP
Published: May 6, 2018
Tweet Email 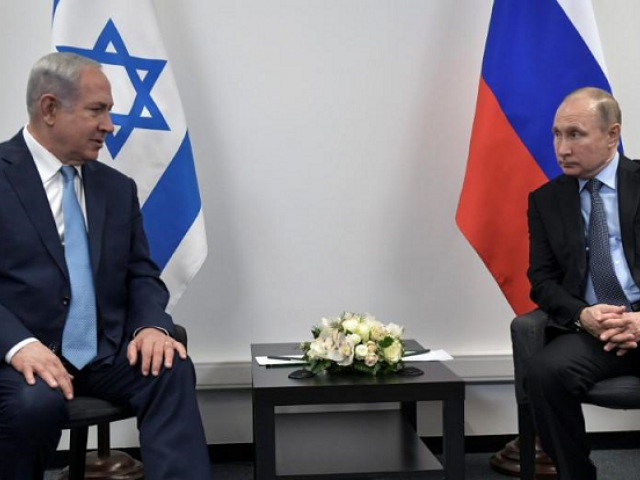 Putin has called on Netanyahu not to destabilise the situation further in its quest to curtail Iran's influence PHOTO: REUTERS

JERUSALEM: Israeli Prime Minister Benjamin Netanyahu will meet Russian President Vladimir Putin in Moscow next week, the premier’s office said, ahead of a possible US withdrawal from the Iran nuclear deal.
The Wednesday meeting will discuss ‘regional developments’, Netanyahu’s office said, and follows the Israeli leader’s unveiling of ‘proof’ of Iran’s alleged past military nuclear ambitions.

A televised presentation by Netanyahu on Monday was followed by phone calls to world leaders, including to Putin, in which the two discussed the Iran nuclear deal, as well as the situation in Syria.
Israel has been accused by Syria of carrying out deadly strikes in its territory, most recently on April 9 and April 30, which killed Iranians as well as Syrian soldiers.

Putin whose troops are backing the Syrian regime has called on Netanyahu not to destabilise the situation further, as Israel looks to prevent Iran and its Hezbollah proxy cementing their military presence.

Russia meanwhile has reiterated its support for the Iran nuclear deal, with Putin telling Netanyahu it was “of primary importance for ensuring international stability and security” in their Monday phone call.

Trump has all but decided to withdraw from Iran nuclear deal: sources

US President Donald Trump and his Middle East allies argue that the agreement, approved by Barack Obama, was too weak and needs to be replaced with a more permanent arrangement and supplemented by controls on Iran’s missile programme.

Trump has threatened to abandon the agreement when it comes up for renewal on May 12, demanding his country’s European allies “fix the terrible flaws” or he will re-impose sanctions.

Netanyahu has repeatedly called for the accord which Iran signed with Britain, China, France, Germany, Russia and the United States to either be altered or scrapped.

He says the agreement does not prevent Tehran from eventually obtaining nuclear weapons and says the lifting of sanctions has increased Tehran’s ability to finance proxy militants in the Middle East.

Kremlin questions whether a new Iran nuclear deal is possible

In his elaborate televised presentation, Netanyahu accused Iran of lying about its nuclear ambitions, while not providing evidence that Israel’s main enemy had actively worked to obtain an atomic weapon since the 2015 agreement between Tehran and six world powers.
Iran has always denied it sought a nuclear weapon, insisting its atomic programme was for civilian purposes.

Besides Putin, Netanyahu discussed the Israeli findings and the Iran nuclear deal with his Australian, British and Indian counterparts, as well as with French President Emmanuel Macron and German Chancellor Angela Merkel.