Former skippe­r’s positi­on in Test side has come under questi­on due to poor recent run of form
By Reuters
Published: April 25, 2018
Tweet Email 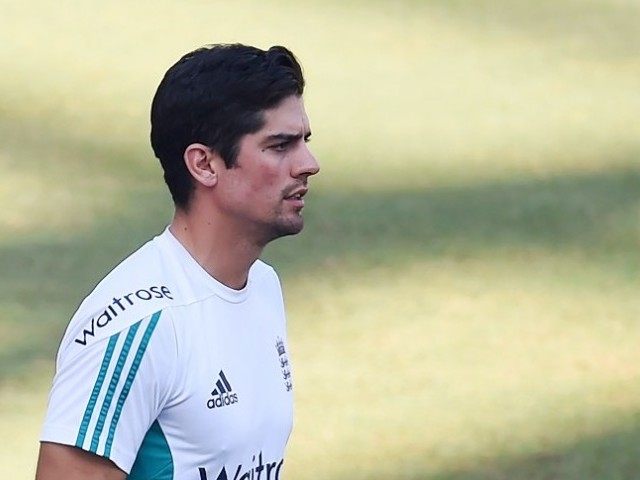 Past it? Cook is England’s highest-ever Test run-getter but the 33-year-old may be coming to the end of his glittering career. PHOTO: AFP

BENGALURU: Opener Alastair Cook has the desire to keep playing for England but is aware that he must continue scoring runs to hold on to his spot, said the former captain.

The 33-year-old, who made his England debut in 2006, has scored more than 12,000 Test runs at an average of 45.73 but his inconsistent spell during the recent tour of Australia and New Zealand have raised questions about his longevity.

Cook scored a total of 23 runs in the two-Test series against New Zealand last month as England continued their winless run following their 4-0 defeat in the Ashes.

“My job never changes,” Cook told reporters. “It’s to score runs at the top of the order. If someone taps me on the shoulder and tells me they don’t want me to open for England, it is going to hurt at this precise moment because I want to carry on.”

However, Cook knows he can’t rely on past achievements to help him keep his spot in the side. “The hunger and desire is still there but no one has a God-given right to play for England,” he said. “You have to score the runs to justify your place. Since I’ve come home I’ve started to look at my preparation. Have I got it right? Do I need to change things? Because that’s the right way to do it. I will never sit here and say I’ve cracked the game or will ever be perfect.”

Cook was set to play for first-class county side Essex against Hampshire on Friday in the domestic championship as he fights to make his mark and earn a call-up for England’s two-match home Test series against Pakistan in May.

Inzamamul Haq to return to action once again