YDA and PSA had staged a sit-in in front of Quetta Commis­sioner Office­
By Our Correspondent
Published: April 25, 2018
Tweet Email 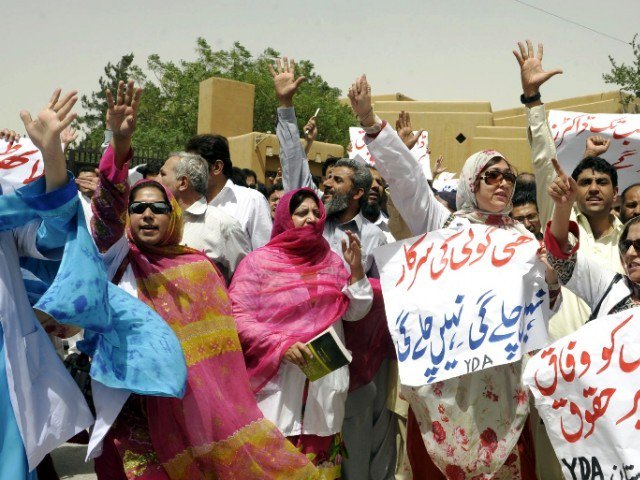 QUETTA: The Young Doctors Association (YDA) and the Paramedical Staff Association (PSA) staged a sit-in in front of the Commissioner Office on Tuesday, demanding issuance of notification regarding increase in their salaries and provision of basic health facilities at government hospitals. However, the suicide attacks on security forces dispersed the protesting doctors as fear and panic gripped the city.

The protesting doctors and the paramedical staff marched from Civil Hospital, Quetta towards the Commissioner Office where they staged their sit-in.

The protesters, carrying placards inscribed with their demands, chanted full-throated slogans against the health department and provincial government.

Balochistan YDA President Dr Yasir Khosti said, “Despite the chief justice of Pakistan’s directions, the provincial government has failed to issue a notification of increase in doctors’ salaries.”

He said that other provinces had increased salaries of their doctors, but the provincial government was reluctant to do the same which was tantamount to depriving them of their basic rights.

It is pertinent to mention that Balochistan Chief Minister Abdul Quddus Bizenjo had urged the protesting doctors to end their strike on humanitarian grounds and had vowed that the provincial government would not tolerate any pressure on them.

The protest caused the worst traffic jam across the city. Inscumb Road, Jinnah Road, Sharah-e-Adalat, Qandhari Bazaar, Prince Road and other adjacent streets were the worst affected by the traffic jam.

Speaker urges youth to go for wide-ranging research on IT