They are seekin­g more conces­sions like cut in power tariff, remova­l of GIDC in the upcomi­ng budget­
By Bilal Hussain
Published: April 25, 2018
Tweet Email 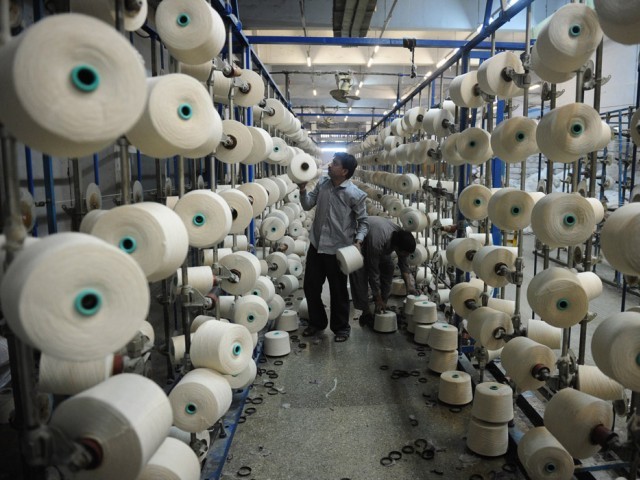 They are seeking more concessions like cut in power tariff, removal of GIDC in the upcoming budget. PHOTO: AFP

KARACHI: With a share of 57% in Pakistan’s total exports and 8.5% in national economy, the giant textile industry is pressing the government to continue with its zero-rated tax facility and provide the incentives offered in the export package.

“The industry is going through a cash-flow crisis as it has already extended the incentives promised by the government in its export package to overseas buyers in order to ramp up exports,” textile tycoon Zubair Motiwala, who also heads some textile bodies, told The Express Tribune.

Textile manufacturers have been pushing the government to release the huge pending tax refund claims so that they could deal with liquidity challenges. Of the Rs180-billion prime minister’s incentive package for export industries, mainly the textile sector, the State Bank of Pakistan has processed Rs50 billion worth of claims, but the industry has received just Rs18 billion.

In fiscal year 2012-13, when the Pakistan Muslim League-Nawaz government came to power just before the close of the year, total export receipts of Pakistan were recorded at $25.078 billion.

The decline came despite the Generalised Scheme of Preferences (GSP) Plus status the European Union awarded to Pakistan in December 2013 that allowed exports at sharply reduced or zero duty.

The status certainly gave an advantage to the PML-N government as exporters enjoyed greater market access to the 28-nation European bloc.

In an attempt to give a boost to low textile exports and improve the country’s foreign currency reserves, then prime minister Nawaz Sharif announced trade enhancement incentives worth Rs180 billion.

In the budget for fiscal year 2017-18, the export refinance facility was maintained at 3%, export-oriented sectors continued to remain zero-rated and the duty-free regime for machinery imports stood unchanged. A 5% regulatory duty was, however, imposed on the import of polyester filament yarn.

The domestic industry welcomed the imposition of regulatory duty on fibre imports.

Now, the textile exporters expect more incentives in the upcoming budget for 2018-19 that could help boost their earnings.

Ahead of the budget announcement, they have asked the government to reduce the cost of doing business by slashing power tariffs in order to enable the industry compete well with regional counterparts. They have sought tariff reduction from Rs11 per kilowatt-hour (kWh) to Rs7.

Industry players have also called for reintroducing the duty-drawback scheme and removing or at least curtailing the duty on the import of synthetic yarn and polyester staple fibre.

They are seeking the removal of Gas Infrastructure Development Cess (GIDC) as well which will reduce the cost of production and improve competitiveness.

Initially, there was no condition in the export package, announced in January 2017, for duty drawback for the first six months from January to June. However for the next fiscal year, the exporters must achieve 10% increase in exports in order to qualify for the incentives.

The target was somewhat achieved as from July to February FY18 exports rose to $8.85 billion compared to $8.18 billion in the same period of previous year. However, some analysts point out that the exporters may have falsely shown the growth in an attempt to get incentives.

According to Motiwala, exports went up after the incentives offered in the export package were extended to the buyers abroad. Lower prices of Pakistan’s products in the international market had been a main factor behind the rise in exports, he said.

However, an analysis indicates that the international textile industry is highly competitive and Pakistan’s major competitors – China, India, Vietnam and Bangladesh – will not let it penetrate their established markets.

These competitors are expected to respond to the price reduction by their Pakistani counterparts.

The textile sector has had a bad 2015 when cotton production fell 27.8% to 9 million bales – each of which weighs 176 kg. The output was significantly lower than the peak Pakistan hit in 2004 with production of 14.6 million bales.

Experts attributed the cotton shortage to the imported genetically modified seeds that were prone to pest attacks. However, the government rejected the notion, blaming the fall in production on changing weather, excessive rains and insect attacks.

An analyst pointed out that some farmers switched to sugarcane cultivation from cotton, but this year they struggled to sell sugarcane to the sugar mills, most of whom were not willing to offer the support price for sugarcane purchase.

Many of the farmers are expected to return to cotton sowing again and with that the demand-supply deficit will contract.

In the meantime, the textile industry has been pressing the government to remove tax from cotton import which is necessary in the wake of domestic production shortfall. According to experts, the textile manufacturers are also attracted by the long fibre of imported cotton compared to the cotton produced in Pakistan.

The industry is not satisfied with government’s efforts as it has failed to implement the plans.

“Exports didn’t get better due to government’s efforts, but it came because of depreciation of the rupee. This is not the right way to increase exports. It would have been an achievement had exports gone up with a stable rupee,” commented Motiwala.