Despit­e repeat­ed vows, PML-N may not be able to end outage­s by the end of its term
By Zafar Bhutta
Published: April 25, 2018
Tweet Email 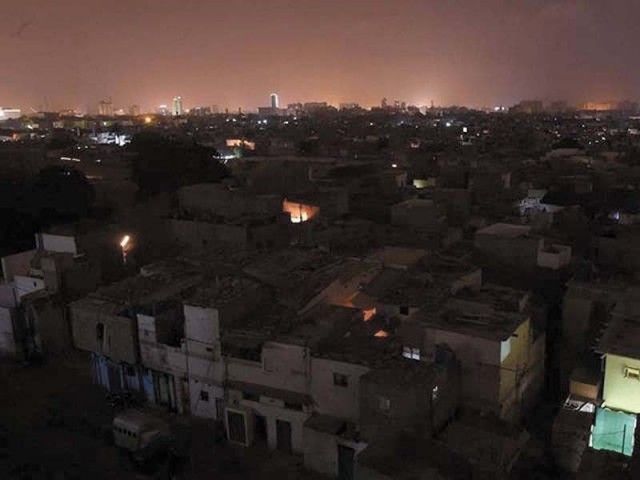 Despite repeated vows, PML-N may not be able to end outages by the end of its term. PHOTO: AFP

ISLAMABAD: The tenure of Pakistan Peoples Party (PPP)-led government had been the worst in terms of load-shedding as consumers endured hours-long bouts of blackouts with no schedule of outages in place that crippled life and business.

The brunt of the load-shedding was borne by the industry and estimates suggested that the country lost 3% of economic growth every year because of the energy shortage during the PPP tenure.

Observing the situation, the Pakistan Muslim League-Nawaz (PML-N) party found an opportunity to launch its election campaign with the promise that it would resolve the problem within six months of coming to power.

However, when the PML-N took reins of the country, it realised that it was not an easy task to do away with power outages in just six months as demand had risen exponentially. It then revised the deadline many a time.

As the government entered its final year, it pledged that there would be zero outages in 2018, when general elections for a new government would be held sometime in the middle of the year.

In the meantime, the PML-N government has claimed that outages had been brought down by 52% in the past four years. Though the industrial sector has been enjoying uninterrupted electricity supply and a load-shedding schedule has been set for other consumers, blackouts are still there.

The government has followed the model of K-Electric for outages in areas where the power distribution company is incurring high losses.

However, this loss-based formula has sparked concern among some quarters who believe that the system has been put in place just to provide electricity without any hiccup for the people living in constituencies of politicians of ruling and allied parties, especially in Punjab, to win over voters in the upcoming polls.

Experts are of the view that the present government’s claim of ending load-shedding during its tenure is like a bubble that will burst in the current summer season as happened in the previous year when then prime minister Nawaz Sharif was forced to transfer water and power secretary Younus Dagha due to false promises.

Earlier, the Ministry of Water and Power had vowed in August and September 2016, when Dagha was the secretary, that load-shedding would disappear after November 2017 and the country would have surplus electricity in the summer of 2018.

The ministry, now called Power Division, had been giving misleading figures to the former premier. Dagha emphasised in a high-level meeting of the cabinet’s energy committee held in September 2016 that Pakistan would have surplus electricity of 1,224 megawatts in June 2018, around the time when next general elections will become due.

Based on the data presented by the former secretary, the Cabinet Committee on Energy decided that electricity outages would be curtailed in urban areas from an average of six hours to three hours a day and in rural areas from eight hours to four hours a day from November 2017.

When the PML-N government had come to power in mid-2013, power outages were at their worst as consumers were enduring 13 to 14 hours of blackouts daily.

Four years later in the summer of 2017, the consumers faced a somewhat similar situation in April and May which annoyed and caused embarrassment for Sharif for failure to meet the commitment.

Again, the ministry of water and power claimed in August and September 2017 that load-shedding would come to an end after November 2017. However, later the ministry told a high-level meeting on May 29, 2017 that the country would face electricity shortfall in the summer of 2018. “This situation is not acceptable,” the then premier remarked.

The discrepancy in the shortfall envisaged by the ministry in August 2016 and the actual shortage recorded in 2017 was glaring. In the summer of 2017, the electricity shortfall was projected to peak at 2,240MW, but the National Power Control Centre (NPCC) data showed that the deficit was far higher at 7,000MW on some occasions in May 2017.

Projections for 2018 were also not very encouraging. The power ministry had expected a shortfall of up to 2,390MW in the summer of 2018 even after expected completion of Tarbela fourth extension and Neelum-Jhelum hydroelectric power projects. Both new projects have a cumulative power generation capacity of 2,370MW.

In the wake of expected electricity demand and supply gap in 2018, the government has divided consumers into two categories.

In the first category, electricity feeders that supply energy to 14.92 million or 60.72% of total consumers across the country would have no load-shedding.

In the second category, the feeders, where losses were between 10% and 20% which covered 21.7% of consumers in both urban and rural areas, would face two to four hours of outages in summer.

A senior government official said the NPCC and power distribution companies had indicated that the expected average demand growth would be in the range of 10% to 13% in 2018 compared with the average demand in 2017.

He pointed out that there would be different levels of shortfall compared with 2017 between March and October 2018. For peak period, the government has planned to bridge the gap through utilising the water stored in dams in order to generate more hydroelectric power.

Despite these arrangements, governance in power distribution companies is a big challenge as the government has failed to bring efficiency and transparency in their work. It has removed some heads of power companies in recent months, but corruption is still rampant and power theft remains unchecked.

The government is particularly focused on ensuring uninterrupted power supply during Sehr and Iftaar in the month of Ramazan. Power tripping has been a common problem faced by it.

It has devised a formula to control load-shedding, but whether it will bring success, only time will tell.

Circular debt – a major drag on the energy chain