Some U.S. allies caught in crossfire of sanctions on Russian arms

Some U.S. allies caught in crossfire of sanctions on Russian arms

Americ­an allies who buy weapon­s and equipm­ent from Russia could suffer as well from latest US sancti­ons agains­t Russia­
By Reuters
Published: April 24, 2018
Tweet Email 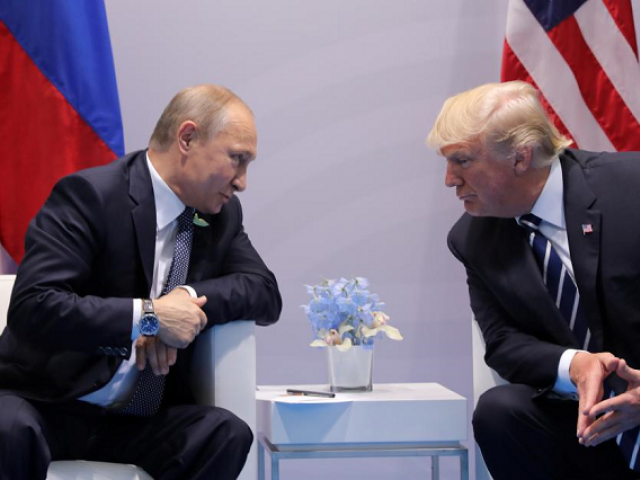 Under a law that U.S. President Donald Trump signed in August, any country trading with Russia’s defense and intelligence sectors will face sanctions PHOTO: REUTERS

NEW DELHI: U.S. sanctions on Russian military exports have put the brakes on a $6 billion deal with India and may derail the arms purchases of other U.S. allies around Asia, experts say.

Under a law that U.S. President Donald Trump signed in August, any country trading with Russia’s defense and intelligence sectors will face sanctions.

The law is designed to punish Russian President Vladimir Putin for the 2014 annexation of Crimea from Ukraine, involvement in the Syrian civil war and meddling in the 2016 U.S. presidential election.

But American allies who buy weapons and equipment from Russia, the world’s second-largest arms exporter, could suffer as well.

The highest-profile example is India, which wants to buy five S-400 long-range surface-to-air missile systems that the country’s military sees as a game changer. The systems are touted as being able to counter the ballistic missiles and stealth aircraft that China is developing, while overwhelming the capabilities of Pakistan, India’s other main adversary.

The deal, which Putin and Indian Prime Minister Narendra Modi struck as part of an inter-government agreement in 2016, has run headlong into the U.S. sanctions law, two officials in Delhi said.

Indonesia and Vietnam also buy weapons from Russia while being regional partners of the United States. Jakarta closed a $1.14 billion pact for Sukhoi fighters recently, while Vietnam is seeking more jet fighter-bombers from Russia.

And with both Almaz-Antey Air and Space Defense Corporation, which makes the S-400, and Rosoboronexport, which negotiates Russian export deals, listed as under sanction, those deals have become trickier.

“The optics of a major arms purchase from Russia looks quite ‘iffy’ from the point of view of Western capitals, especially at a time when Russia-West relations are at an all-time low and India seeks strategic convergence with the West, including with the U.S.” said Abhijnan Rej, a defense strategy expert at Observer Research Foundation, a New Delhi think tank.

US military puts China and Russia at heart of strategy: Mattis

The U.S.-led airstrikes this month against facilities of the Syrian government, an ally of Russia, has further aggravated tensions between the superpowers.

A Russian source close to the Indian S-400 deal said “a lot will depend on the confidence and sanity of our Indian partners.”

The effects of the U.S. sanctions law could be more sweeping than intended, said Cara Abercrombie, a visiting scholar at the Carnegie Endowment for International Peace.

“I think it is clear that Russia is still pressing Vietnam for big deals,” Thayer said, noting that the two countries already have had reciprocal visits by defense ministers this year.

But with the United States working hard to promote sales of American military hardware, and sanctions against Russia’s exporting agencies, Vietnam’s plans could prove overly costly.

Indonesia, meanwhile, said the delivery of the first couple of Sukhoi Su-35 jets out of a total of 11 is on track for this year. Officials said that so far they did not anticipate any changes to the deal with the Russians.

Indonesian defense officials declined to describe what, if anything, they might do to tackle the fallout of the sanctions imposed on Russian arms sales.

The issue is crucial to the Indian military, because without Russian parts, supplies and maintenance help, “our ships won’t sail, our planes won’t fly,” the official said. “We can hardly be the regional security provider that America wants us to be at this rate.”

One way to avoid secondary sanctions would be if the U.S. determines that India is reducing its dependence on Russian arms, said Atman Trivedi, managing director of Hills & Company, a Washington-based firm that advises on international trade and investment.

Russian hardware represented 62 per cent of the country’s total weapons imports during the past five years, compared with 79 per cent in 2008-2012, the Stockholm Peace Research Institute said in a report last month.

The U.S. administration could also declare that imposing sanctions on India, a major defense partner, would hurt U.S. national security interests. That would allow a waiver permitting India to do business with Russia.

The United States has emerged as India’s No. 2 weapons supplier, closing $15 billion worth of deals over the last decade. Now Lockheed Martin and Boeing are leading the race to provide India with a fleet of new fighter-bombers, one of the world’s largest open tenders.

“The intent of the legislation was never to disrupt U.S.-India defense relations, which Congress has repeatedly recognized in law as a strategic priority to the U.S.,” said Benjamin Schwartz, aerospace and defense head at United States India Business Council.

Abercrombie of Carnegie added that if Congress grants waivers to India, it may also need to do so for other countries such as Vietnam and Indonesia.

“The bottom line: India warrants an exemption from these secondary sanctions, as does any country with which the U.S. is forging new and strategically important defense relations,” she said.