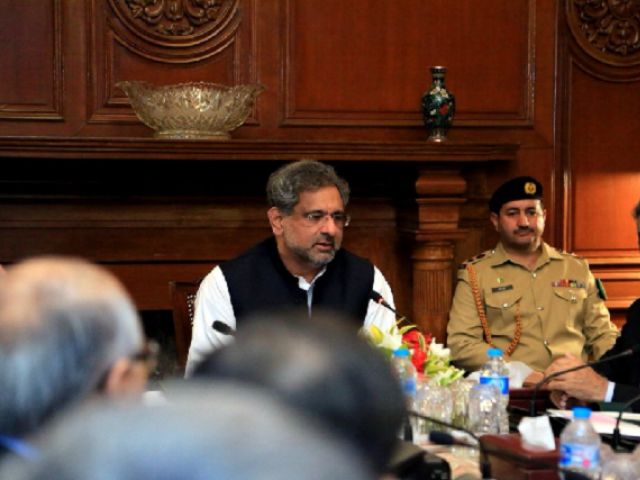 KARACHI: Sorting out dispute between two key energy utilities – the K-Electric (KE) and the Sui Sothern Gas Company (SSGC) – which has crippled life in Karachi since start of summer, Prime Minister Shahid Khaqan Abbasi has directed the SSGC to resume required gas supply to the K-E without any delay.

“Karachi’s electricity woes will be resolved after the resumption of gas supply starting today. The gas will be supplied as and when needed. In 15 days all dues [of the SSGC outstanding against the KE] are to be determined and settled.

“The KE will be provided 190 million cubic feet per day (MMCFD) gas as required. Not only electricity, but the water issue of the city should be resolved,” Abbasi said on Monday during a press conference.

The press conference was held after the premier chaired a cabinet meeting at Sindh Governor House to  review the power crisis that started in the country’s largest city earlier this month after the SSGC suspended its 190 MMCFD gas supply to the KE due to nonpayment of Rs80 billion.

The PM said a committee was also formed under his finance adviser Miftah Ismail to address the issue.  However, he said, 100% load-shedding could not be controlled given the power theft in some areas of Karachi. “The power outages will continue in those areas who are involved in power theft,” he said.

The PM, who was flanked by Miftah Ismail, Federal Minister for Power Awais Leghari, Sindh Governor Muhammad Zubair and representatives of the KE, the SSGC and National Electric Power Regulatory Authority (Nepra) who also attended the energy meeting.

The premier directed relevant officials to take the Karachi Water and Sewerage Board (KWSB), the SSGC and the KE on board and resolve power and water crisis in the stipulated time period.

Commenting on the nature of load-shedding in Sindh, he asked how the issue could be resolved in presence of 40 per cent electricity theft. “After the 18th Amendment, we are doing whatever we can in this context. We have allocated funds to the provincial government,” he added.

The premier also said complete eradication of load-shedding is possible only if 100 per cent recovery is made. “Billing and supply are directly related. It was the gas shortage that caused load shedding. Hopefully, everything will turn to normal as soon as these issues are resolved,” he added.

When asked about the federal government’s contribution to Karachi, PM Abbasi said multiple projects have been completed by the government. “We allocated Rs25 billion under Karachi Package of which Rs8 billion has also been released. We did more than we committed to.

“We have almost finished Green Line Bus project in Karachi. Now Sindh government should bring buses to ply on the route. The provincial government let us know if it can’t do it. We are ready to provide green buses for Karachi too,” he said.

Since last month, consumers in Karachi have been at the receiving end of a bitter row between the KE and the SSGC, resulting in almost 10 hours long load-shedding at a time when demand for power surged due to a heat wave.

The issue prompted political parties and businesses to organise protests and rallies and Chief Minister Murad Ali Shah also wrote a few letters to the PM to resolve the issue between the two entities.

After the PM’ press conference, CM Shah while speaking to media said he protested over the power issue, which compelled the PM to visit Karachi and resolve the issue.

“The federal government should ensure that the SSGC supply gas to power utility without any break. Both the warring utilities must sign an agreement and implement it,” he said.

Our party slogan for general elections will be sanctity of vote: PM Abbasi

“We look up the CPEC as partnership between the two governments. It is a new form of cooperation,” the PM said in his keynote speech while addressing a CPEC related summit in Karachi.

“Three years ago CPEC was unheard of. Today it is known globally. The BRI initiative of Chinese President Xi is a project for generations. Recently, we discussed security and connectivity with Afghanistan, who also recognises CPEC as an opportunity,” he added.

“The CPEC has now become a reality — two power projects under the initiative have been completed and the third one is about to be finished,” he added.