Majori­ty of people from low-income areas such as New Karach­i, Orangi and Baldia towns are the victim­s of this proble­m.
Published: May 16, 2011
Tweet Email 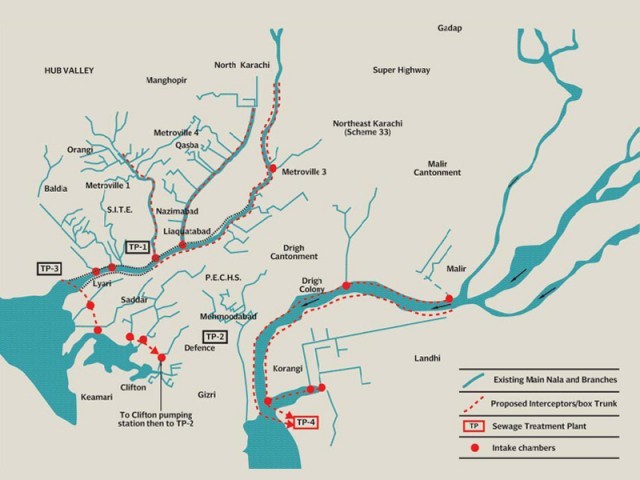 It takes four days to pump water if the schedule is affected, says chief engineer.

Residents of low-gravity (or low-lying) areas in the city are facing an acute water crisis as load shedding has interrupted the process of channeling water to their neighbourhoods.

Channelisation is the process of filling canals with water. Normally, if there is an hour of load shedding at major pumping stations such as those at Pipri and Gharo, it would take up to 12 hours to fill the canal.

Iftikhar Ahmed Khan, the chief engineer for bulk water distribution, said that the Karachi Water and Sewerage Board (KWSB) cannot afford to set up standby generators, which cost Rs1 million each, at nearly 200 pumping sites in city. “The water board does not have any problem with its bulk supply and distribution from the River Indus to the main reservoirs but it cannot afford to spend large amounts on alternate means of electricity [when there is load shedding].”

Cities have a complex water supply system as water has to go through multiple points of bifurcation so that it can be supplied to different towns and localities. Water travels from a bulk supply line to semi-bulk supply lines, from where it goes to local pumping sites and then to water boosting lines. The water reaches end users once it has travelled through these four points.

Furthermore, water distribution is scheduled differently in different parts of the city. At some places, it is repeated every 12 hours, while at others it can be at intervals of 36 to 48 hours. In the majority of cases, the distribution is done at 48-hour intervals.

If there is load shedding or any glitch in the pumping system, the bulk lines, which are like canals, take 36 to 48 hours to be filled again. Only after that can water be pumped back, and it takes another 48 hours for it to go through the four bifurcation points, to reach houses. This entire process is referred to as ‘channelisation’, and any disruption of power at the bulk supply line point can, therefore, cause a delay of four days to get the supply back to normal.

The majority of people from low-income areas such as New Karachi, Orangi and Baldia towns are the victims of this problem. They have to fetch water in buckets from town offices, while those who can afford to store water buy it from tankers.

People living in apartments and in multi-storeyed buildings in high-gravity areas also have trouble pumping water, said the chief engineer. “These areas are solely dependent on a mechanical water suction system, which relies on electric motors. When this schedule is affected, it takes four days for the water supply to resume.”

Meanwhile, there are certain areas in the low-gravity category where the KWSB does not need to pump water. They include Korangi, Ittehad town, Liaquatabad, F.B. Area, Water Pump, Ayesha Manzil, parts of Lyari, Jamshed town and old Nazimabad.