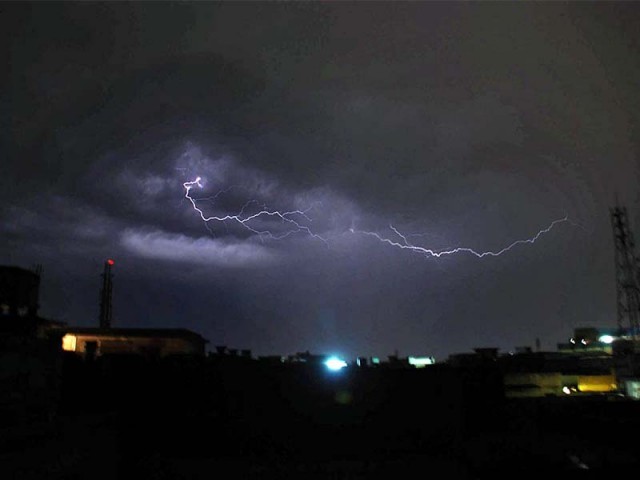 Lightning strikes in Peshawar, while a woman treads through snow in Chitral. PHOTO: AGENCIES

PESHAWAR: Torrential rain with hailstorm and thunderstorm continued to lash different parts of the province and the tribal belt on Friday, causing damage to property and leaving at least two people injured.

A fresh spell of torrential rain in Khyber-Pakhtunkhwa (K-P) and the Federally Administered Tribal Areas (Fata) had started on Thursday. It continued across the province and intermittently in Fata on Friday.

As a result, a man and a child were injured in separate incidents of roof collapse in Peshawar and Mardan on Friday.

The injured were rescued and taken to hospitals for treatment, said the Rescue 1122.

In the Gujar Garhi village of Mardan, the roof of a house collapsed injuring 35-years-old Jan Bacha. A Resue 1122 medical team reached the spot and provided him with medical aid and later shifted him to the Mardan District Headquarters Hospital (DHQ).

On Friday, the roof of a house — owned by Tauqeer Rehman — in Peshawar’s Yaqatoot area, collapsed due to the rain. As a result, a child was injured.

Rescue workers managed to who evacuate the child and provide it with medical aid.

Locals said that the roof collapse had damaged possessions inside the room such as furniture and other articles. 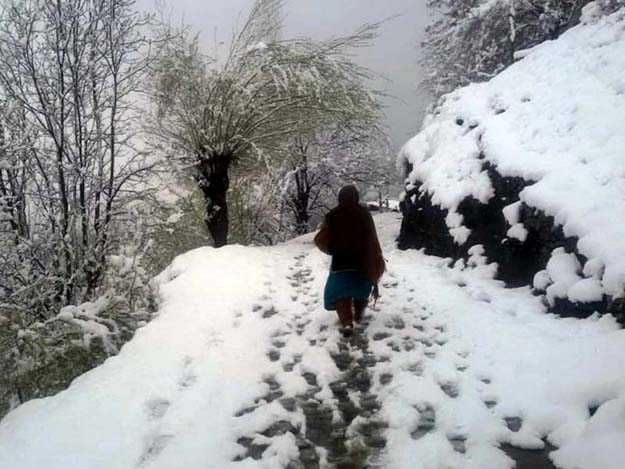 In the absence of officials, commuters resorted to posting images and videos of flooded roads on social media as they criticised the poor performance of the provincial government.

Main thoroughfares of the city including GT Road along with its service roads, Khyber Road, Charsadda Road and University Road were flooded with rainwater at various point causing problems to the commuters.

Several roads in the city rainwater due to work on the Bus Rapid Transit (BRT) project and pipeline installation by the Sui Northern Gas Pipeline Company Limited.

The development work has left open ditches along the roads and have blocked drains which compounded the problems of commuters.

Torrential rain: Another round of destruction claims 12 lives in K-P, FATA

The rain was accompanied by snowfall in mountainous areas including Hazara and Malakand Divisions where mountains got white-tops.

In the Haraza Division, land sliding blocked the Karakoram Highway in Lower Kohistan.

Some hailstorm was also reported which damaged properties, crops and orchards.

Meanwhile, the Khyber-Pakhtunkhwa (K-P) Provincial Disaster Management Authority (PDMA) spokesperson Taimur Ali told that they are in contact with the district administration.

He added that they had issued alerts across the province to respond to any possible emergency situation.

On the other hand, the Pakistan Metrological Department (PMD) has issued a weather advisory stating that a shallow westerly wave has entered the country and will affect different parts of K-P on Saturday bringing more rain with gusty winds, hailstorm and thunderstorm.