It is the first time Reuter­s has won two prizes in one year
By Reuters
Published: April 17, 2018
Tweet Email 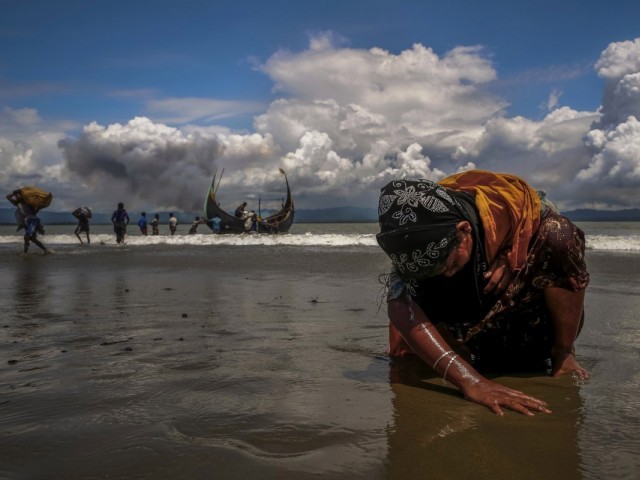 NEW YORK: Reuters won Pulitzer Prizes on Monday for international reporting and photography while the New York Times and Washington Post shared honours for exposing sexual harassment in America and detailing the U.S. investigation of Russia’s involvement in the 2016 presidential election.

The Pulitzers, the most prestigious awards in American journalism, recognized Reuters in international reporting for exposing the methods of police killing squads in Philippines President Rodrigo Duterte’s war on drugs, and for feature photography documenting the Rohingya refugee crisis in Myanmar and Bangladesh.

“In a year in which many Pulitzers were rightly devoted to U.S. domestic matters, we’re proud at Reuters to shine a light on global issues of profound concern and importance,” Reuters Editor-in-Chief Stephen J. Adler said.

It was the first time Reuters has won two prizes in one year.

In the Philippines coverage, Reuters reporters Clare Baldwin, Andrew R.C. Marshall and Manuel Mogato “demonstrated how police in the president’s ‘drug war’ have killed with impunity and consistently been shielded from prosecution,” Adler said.

The coverage included a report that revealed how a police anti-drug squad on the outskirts of Manila had recorded an unusually high number of killings. Many members of the squad came from a distant place that was also Duterte’s hometown, where the campaign’s brutal methods originated during his time as mayor there.

The Reuters photography staff was honoured for images of the violence endured by the Rohingya, a Muslim minority, as they fled Myanmar for Bangladesh.

“The extraordinary photography of the mass exodus of the Rohingya people to Bangladesh demonstrates not only the human cost of conflict but also the essential role photojournalism can play in revealing it,” Adler said.

Reuters reporters Wa Lone and Kyaw Soe Oo have been jailed in Myanmar since Dec. 12, charged under the colonial-era Official Secrets Act, while investigating the killing of 10 Rohingya Muslim men in Rakhine state.

In the United States, major media took other Pulitzers for reporting that shaped the political and cultural agenda.

The New York Times and the New Yorker magazine shared the honour for public service for their reporting on sexual harassment allegations against Hollywood producer Harvey Weinstein.

New York Times reporters Jodi Kantor and Megan Twohey won for their report on Weinstein, which triggered a series of similar allegations against influential men in politics, journalism and show business and gave rise to the #MeToo and #TimesUp movements that have encouraged victims to come forward.

The New Yorker’s Ronan Farrow was recognized for a Weinstein report that detailed the allegations of a woman who reported her accusations to New York police. Authorities have since renewed a criminal investigation of Weinstein.

The Washington Post won the investigative reporting prize for breaking the story that the Alabama U.S. Senate candidate Roy Moore had a history of courting teenage girls. The Moore report came as stories of men abusing their power over women abounded, contributing to changing public attitudes. Moore, a Republican backed by President Donald Trump, had been favoured to win the special election but lost to Democrat Doug Jones.

The New York Times and the Washington Post shared the honour for national reporting for their coverage of the investigation into Russian involvement in the 2016 U.S. presidential election.

The award was given “for deeply sourced, relentlessly reported coverage in the public interest that dramatically furthered the nation’s understanding of Russian interference in the 2016 presidential election and its connections to the Trump campaign, the President-elect’s transition team and his eventual administration.”

The Pulitzers here have been awarded since 1917, after being established in the will of newspaper publisher Joseph Pulitzer. The 17-member Pulitzer board is made up of past winners and other distinguished journalists and academics.

It chose the winners in 14 journalism categories plus seven that recognize fiction, drama, history, biography, poetry, general nonfiction and music.

Kendrick Lamar became the first rapper to win a Pulitzer Prize, taking the music award for his album “DAMN.”

Reuters won a Pulitzer Prize in 2014 for international reporting by Marshall and Jason Szep on the violent persecution of the Rohingya. The Reuters photography staff also won the breaking news photography award in 2016 for photos of Middle Eastern refugees arriving in Europe.

Reuters’ first Pulitzer, for breaking news photography, came in 2008 for Adrees Latif’s photo of a Japanese videographer fatally wounded during a street demonstration in Myanmar.