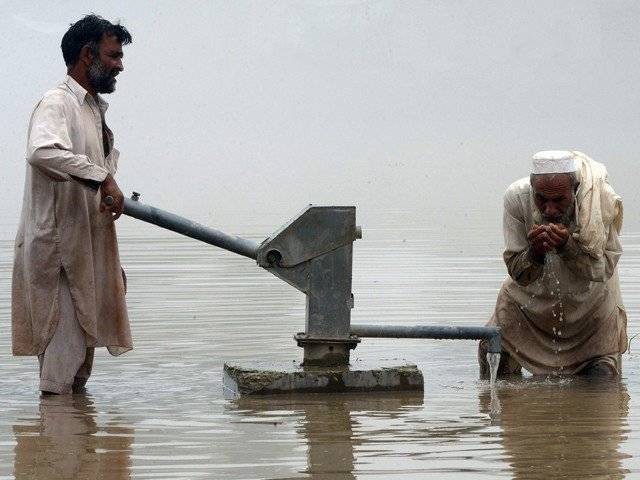 Water conveyance efficiency of Pakistan is 55% and irrigation efficiency is 41%. Almost 45 MAF of water is lost during canal and watercourse flow. Pakistan also wastes large quantities of water due to lack of water storage facilities. The country has storage capacity for merely 30 days against the minimum requirement of 120 days.

Significance of storage also has special relevance for Pakistan as the country receives 84% water during the summer season. Precipitation also varies considerably across the country ranging from 100 mm (Balochistan) to 1,500 mm (Northern Areas). Variability is too applicable in terms of seasons, about 60% precipitations occur during July-September.

Non-availability of storage facilities paves the way for the wastage of water in summer and scarcity during rest of the year. The situation will be further aggravated in the future due to climate change and increasing population.

A report by the United Nations Development Programme said that water demand would increase by 14% in 2025 due to increase in population (2017 million). However, estimates need to be revised as population is increasing at a higher rate as compared to government estimates. Last year’s population census shows that Pakistan has a population of 221 million. So we have already crossed the mark of 217 million with the government unable to invest in the sector.

Water is direly needed in every sphere of life including agriculture, livestock, industry, environment and domestic. Agriculture is a major consumer of water with 93% followed by the domestic and industrial sectors.

Water is also a cheap and renewable source of energy. Hydropower can contribute in multiple ways to the national economy. It will help to make our industry competitive in the international market. Our GHG emissions would be lower, which will project Pakistan as an environment and climate-friendly country. Many countries are investing in production of hydropower on a larger scale. Norway produces about 96% of its electricity from hydropower installations.

Despite the multifaceted challenges, the sector is still a victim of political point-scoring and interests. Provinces are fighting over the distribution of water and building of storage facilities. The Kalabagh Dam is the worst victim of this political game and point-scoring. The dam had to be built in early 1980s or 1990s according to the World Bank report way back in 1960s. But it is still on the list of disputed items and provinces are unable to resolve the issue. Khyber-Pakhtunkhwa’s (K-P) political parties have developed an elaborate list of objections on various grounds but the most prominent is logging of the city. However, these objections need to be verified by sold, independent and scientific research and evidences.

Sindh has its own objections due to a trust-deficit. Sindh feared that being a low riparian country it might have to suffer water shortage due to dam building. There are also frequent complaints about the non-availability of water which are used to create bad blood about Punjab. The reality is that we are not storing water for the lean period, as 84% is available during summer months (about 128 MAF). Another major element of debate is distrust about Punjab. For resolving issues Punjab must come forward to clear all doubts of smaller provinces. It is necessary to build storage capacity on a priority basis.

Currently Pakistan has storage facility of only 11 MAF and uses almost 45 MAF during summers from the available water for crops, animals, industry and household purposes. This means that the rest of the amount of water is being discharged in the sea. Average annual flow down the Kotri has been calculated at about 31 MAF. It is worth mentioning here that required amount of flow down the Kotri is 8.6 MAF, which means that 23 MAF is wasted every year. So there is a problem of mismanagement. Balochistan is mostly missed in the debate on water sharing and distribution. Balochistan criticises Sindh for low availability of water, as Balochistan is low riparian to Sindh. Balochistan has vast potential for agriculture and generation of livelihoods for hundreds of thousands of people.

Unfortunately, it could not exploit its potential due to lack of availability of water for a number of reasons. First, Balochistan lies in semi-arid to hyper-arid areas where precipitation rate is very low. Second it does not get its required amount from the available resources due to lack of water storage facilities across the country. Third, there is political bargaining among the provinces to get major chunk of available water. It has turned Balochistan into a non-productive region.

Climate change will aggravate the situation. In the short-term there would be floods due to rapid glacier melting and erratic rainfall patterns. In the long-run, the country will have to face shortage of water, which will further worsen the prevailing situation. Recently UNDP categorised Pakistan as one the countries most affected by climate change.

Pakistan has to realise that we have reached a point where we need to take practical measures to tackle the crisis.